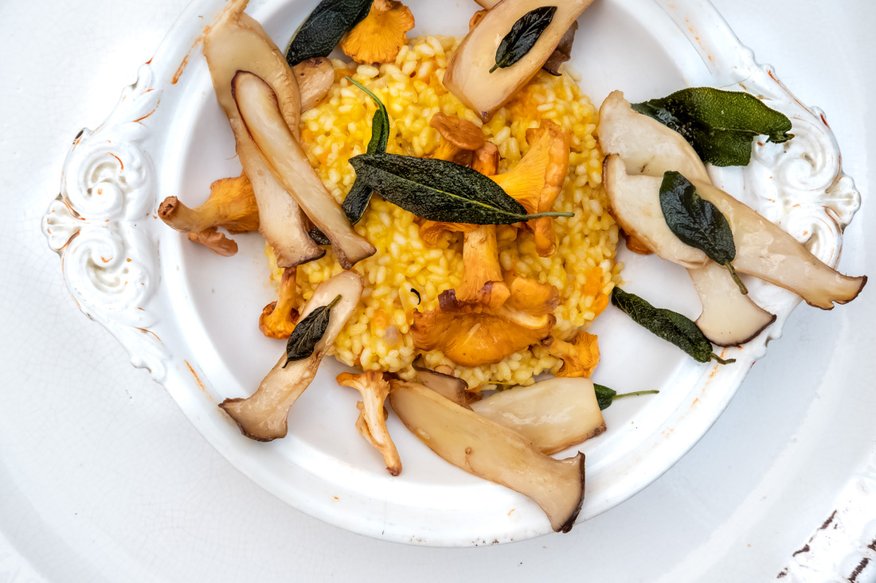 Homemade risotto is simple and fresh, based upon seasonal vegetables. It is neither complicated nor time-consuming, rich or heavy. Moreover it is a dish that can be brought to the table in less than an hour after stepping into the kitchen. The following recipe is the starting point for many variations on rice with vegetables so iconic and important in the culinary traditions of the Veneto.

To make a simple vegetable broth for the risotto, bring two liters of water and a generous teaspoon of sea salt to a boil. Add the bay leaves, celery and lovage as soon as the water starts to simmer. Let the herbs slowly steep on the back burner for a half an hour.  If you happen to have a small potato, or a wedge of tomato in the fridge, add that to the broth too. Wash and peel the carrot, celery stalk and shallot.  Wash the vegetable peels and root ends of the celery in a colander and throw them into the simmering herb broth. Mince the shallot, carrot and celery with a sharp knife and set it aside in a bowl until you are ready to start making the risotto.

Brush the bits of sand from the chanterelle with a soft cloth, removing the root ends. Make a marinade with a pinch of sea salt, a squeeze of fresh lemon juice,  extra virgin olive oil and some Amontillado sherry. Whisk the ingredients into a smooth emulsion with a fork. Pour the marinade over the raw chanterelle and let the mushrooms soak up its aromatic flavor.

Preheat the oven to 205 degrees Celsius. Wash the pumpkin of your choice. Cut off the top in much the same way you would to make a pumpkin lantern. Place the pumpkin and its “beret” shaped lid on an oven platter covered with parchment paper. Sprinkle the pumpkin with sea salt and place  it in the middle of the oven. Bake it until the velvety orange pumpkin flesh can be easily pierced with a butter knife. Remove the pumpkin from the oven and allow it to cool before scooping out the seeds. (Yes, indeed! You can toast the seeds later.) Spoon out 200 grams of pumpkin and mash it with a fork into a coarse purée. Set the rest of the pumpkin aside to make a soup for a busy work week. . . . at least that’s what I did.

Melt the butter, or if using, warm the olive oil in a nice shallow pan. Add the minced trio of shallots, celery and carrot (also known as a soffritto),cooking them at low heat a few minutes without stirring. Once the shallots have turned transparent, add the rice, stirring well until it is evenly distributed through the soffritto.

Splash some amber-colored Amontillado sherry into the pan and allow its hazelnut flavor to soak into the rice grains. Add the pureed pumpkin, a good pinch of salt and three large soup ladles of warm vegetable broth. Stir the rice constantly for four minutes, or until the broth is almost absorbed. This will make for a creamy risotto later on.

Add three more ladles of broth. Keep stirring, but not constantly, making sure the heat is regulated in such a way that the rice cannot burn on the bottom. When the second amount of broth has been absorbed, taste-test the rice. If it is soft on the outside with a hard center in the middle, it is almost done. On an average, this should take about twenty minutes. At this point, add another three full soup ladles to the rice along with the grated Parmesan cheese and stir all ingredients well. Turn off the heat. Put a lid on the pan and shake it gently back and forth several times. Let the risotto rest five minutes.

The very last step to the cooking process has arrived ! So slice the white mushrooms lengthwise and pick the sage leaves from their stalks. Heat three tablespoons of olive oil in a skillet at medium heat. Add the sage leaves and stir fry them a minute or two, then add the mushrooms. Sauté the sage until it is crisp and the mushrooms are lightly caramelized around the edges.

Taste the risotto for the right balance between smooth and savory, salty and creamy. Add a bit of salt or a bit of warm broth if needed. Once you are happy with the results of your cooking,  spoon the risotto into your favorite bowl. Arrange the fried sage and caramelized white mushrooms around the edges. Top the risotto with  the chanterelle and drizzle over the olive oil and sherry marinade for a lovely final touch. 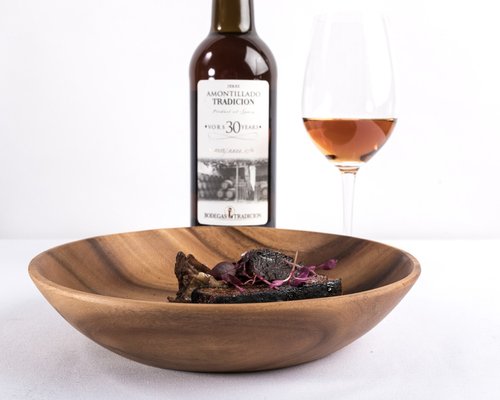 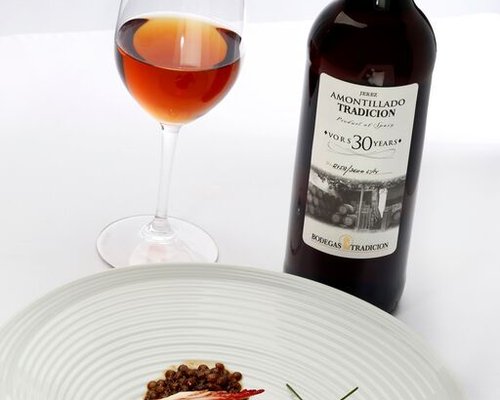