The ABC of the Fortified Wines of Jerez

When talking about wine we usually think in terms of whites or reds from different regions and grape varieties, but the wealth of our winemaking heritage is such that to understand it better we also need to consider how it is made.
We often encounter young wines, barrel aged wines and sparkling wines, yet there are some more unusual ones such as Finos, Amontillados, Palos Cortados… but do we really know what it is which sets them apart? Are these wines exclusive to a place? Is the difference down to the production process, a grape variety or where they are produced? 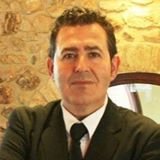 To find out, let’s submerge ourselves in the world of fortified wines and ask sommelier Javier Campos who is a qualified Sherry Educator.

What is the definition of the dry, medium-dry, medium sweet and sweet wines?

How do we define the difference between fortified “vinos generosos”and “vinos licorosos”?

The “vinos generosos” from Jerez are those with no more than 5g/l residual sugar and are therefore dry, and after fermentation, a film of yeast appears on the surface known as the “velo de flor” which sets off the biological ageing. The wines affected to whatever extent by flor are Fino, Manzanilla, Amontillado and Palo Cortado.  From this point, depending on the type of wine desired, the wine will be fortified to 15ᴼ or 17ᴼ by the addition of wine alcohol, or not.

As to the “vinos licorosos” or “vinos generosos de licor” they are usually “vinos dulces naturales” blended with “vinos generosos” to which can be added some concentrated must to take them above 5 g/l sugar. These are known as Medium, Pale Cream and Cream. Lastly there are the “vinos dulces naturales” which are usually made from Moscatel or Pedro Ximénez grapes picked overripe and often sun-dried. The must is fortified and they are aged oxidatively.

The production process determines the type of wine and its characteristics. What are biological ageing and oxidative ageing? 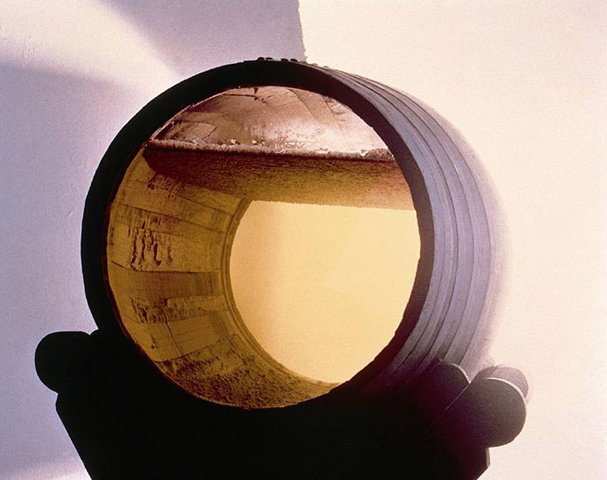 Biological ageing starts when the wine has settled after fermentation and a film of yeast gradually develops on the surface. The yeast feeds on alcohol, any unfermented sugar, glycerine and oxygen and because it covers the wine’s surface it protects it from oxidation. The yeast is called “flor” because it is thickest in spring and autumn, like flowers, but it only appears within a certain margin of alcoholic strength.  Oxidative ageing takes place in wines with higher strength than flor can cope with, so the wine ages in contact with the air and is known as Oloroso. While the minimum ageing period is two years, most wines age much longer in pre-seasoned barrels of American oak, either statically or dynamically in a system known as soleras and criaderas.

Where does this solera and criadera system come from and what characteristics does it give the wine? 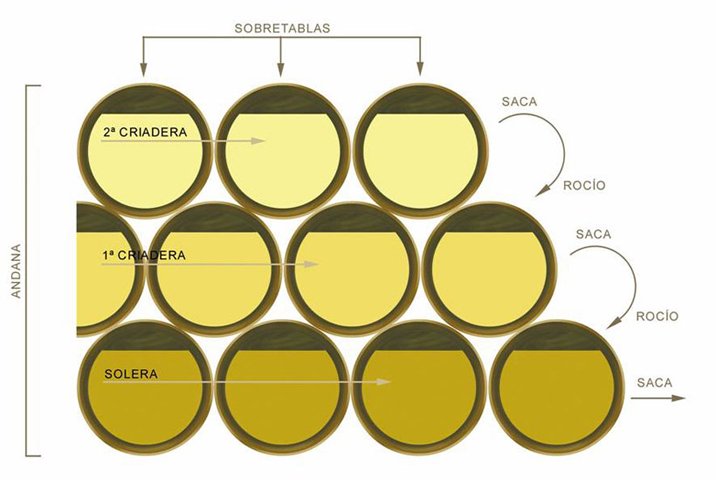 It is the system most widely used for this kind of wine which moves from barrel to barrel during ageing. The amount of fortification alcohol used determines whether the ageing will be biological or oxidative, but soleras are used either way. There are rows of barrels piled on top of each other. Wine for bottling is extracted from the bottom row, the solera, which is then topped up with wine from the next row, the 1st criadera. It is then topped up from the 2nd and so on till the new wine comes from its storage in the “sobre tablas” and enters the last criadera which is the uppermost row of barrels. As the wine gets progressively older as it works its way from the last criadera to the solera it can only have an average age, and this can be calculated by a formula of the number of rows, how much wine was extracted and the frequency of extractions. The wine evolves according to many influences including the original must, the barrels, the temperature in the bodega or place in the bodega, the alcohol level, the length of the ageing period and the winemaker. It is magic. These are unique wines with unique nuances.

What are the criteria for making the different types of “vinos generosos”?

Every bodega makes its wines according to the properties of the young wine and what it wants to do. It may be more suitable for biological ageing or oxidative ageing dynamically in solera or even to be a vintage wine aged statically. There are many factors which complicate the classification process. Just think, to make five different types of wine they only use one grape variety, the Palomino. It must be all this complexity which has earned the producers worldwide recognition for such a special and unique wine.

Fino, Oloroso and Amontillado are the most usual classifications. What are their characteristics and differences?

What are the characteristics of “vino generoso de licor” and how are they different?

How does the bodega decide which wine will become one or another type?

Well, the same way winemakers do it in other regions. It depends on the harvest, the climate, their instincts etc. Once the base wine has been made they taste it to see if a given wine has inclinations to go one way or another. The Jerez winemakers have prodigious tasting skills, and they know if a new wine wants to be Fino or Oloroso, or perhaps Palo Cortado, a clear example of this.

What exactly is Manzanilla? Is it just a different name, should it be among the Finos?

It should be among the Finos – depending on whom you ask, hee hee! Really it is a Fino, made in exactly the same way, but only made in Sanlúcar de Barrameda where climatic and environmental factors make palpable differences in the wine. 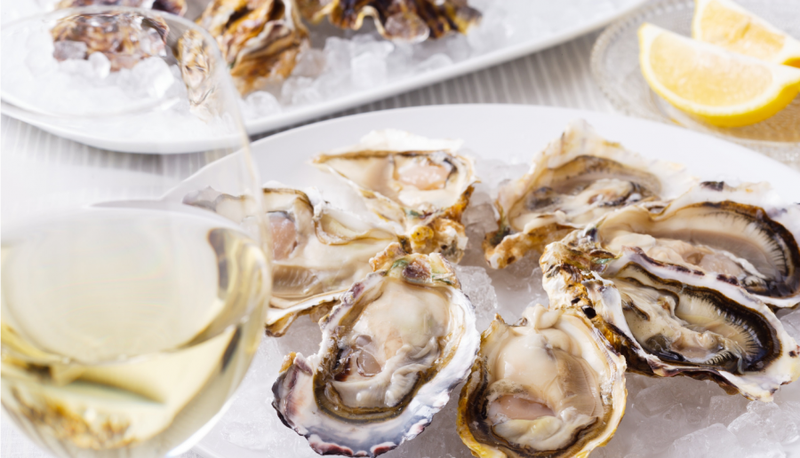 And Palo Cortado?  Why is it surrounded by so many myths and why can some be so expensive?

The magic of Palo Cortado! It is the title of a documentary which for those who don’t know the wines of Jerez might seem like a politician’s speech, in which there is much content, much to figure out and little to understand. In fact Palo Cortado is a wine which starts life as a Fino, but at some point in its youth the winemaker notices nuances which set it apart as a Fino, so it is fortified to 17ᴼ and the barrel, already marked with an identifying chalk stroke for Fino (a palo), is given a cross stroke or “cut“ (cortado). From now on the wine will age oxidatively. 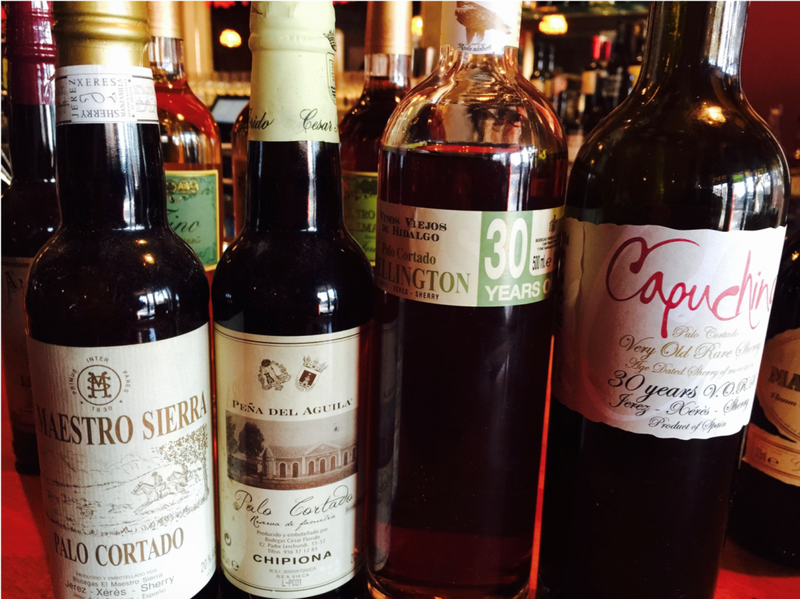 It is true that there are some very expensive examples, but they are not the most expensive wines in Jerez. Long ageing in very special soleras makes for high prices. For that we’d need to look at the special wines, the VOS and VORS, but we’ll leave that for another article about their special characteristics of minimum ageing. Some can be over 50 years old. But since we are talking about price, I should point out that

the price for Sherry is very low when we take into account the effort and the work which has gone into its production. We could easily pay 1,500 euros for a Château Petrus but just 150 euros for a superb Oloroso from Tradición. We are very unequal.

When should these wines be drunk and with what food do they marry best?

These “vinos generosos” go wonderfully with everything. They are probably the most versatile of all in this respect, as much in affinity as with contrasts. You can choose a classic marriage of Manzanilla with prawns or something more daring like spicy Thai rice with a very old Cream. The possibilities are infinite and always delicious. 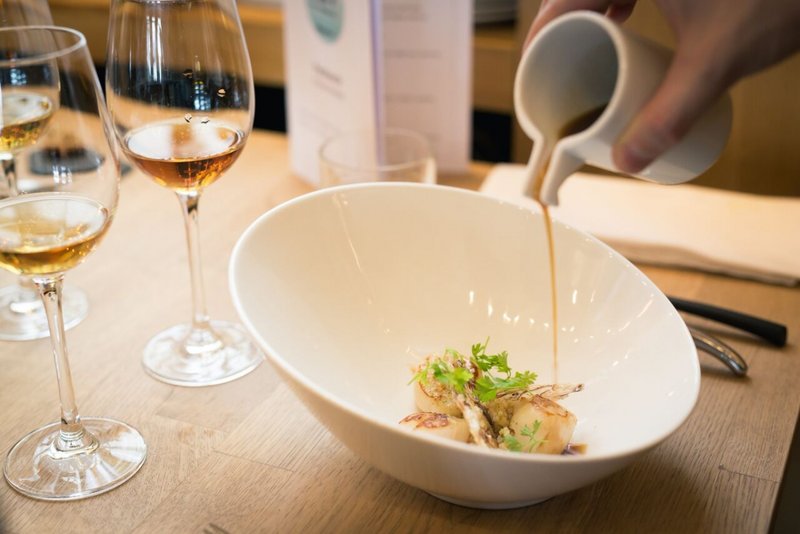 Read the original article, written by Carmen Fernández for Vinetur.com