A guide to pairing Sherry Wine with different styles of flamenco

Every year in February, Jerez the capital of Flamenco and Sherry Wines celebrates the international Flamenco Festival.  Attended by more than 30,000 people from 40 plus countries the festival is a genuine and significant artistic manifestation of Flamenco.  The relationship of Flamenco and Sherry wines have been intertwined for hundreds of years, ready our guide to pairing Sherry with the palos of Flamenco, guided by Flamencologist and Sherry Educator José María Castaño Hervás. 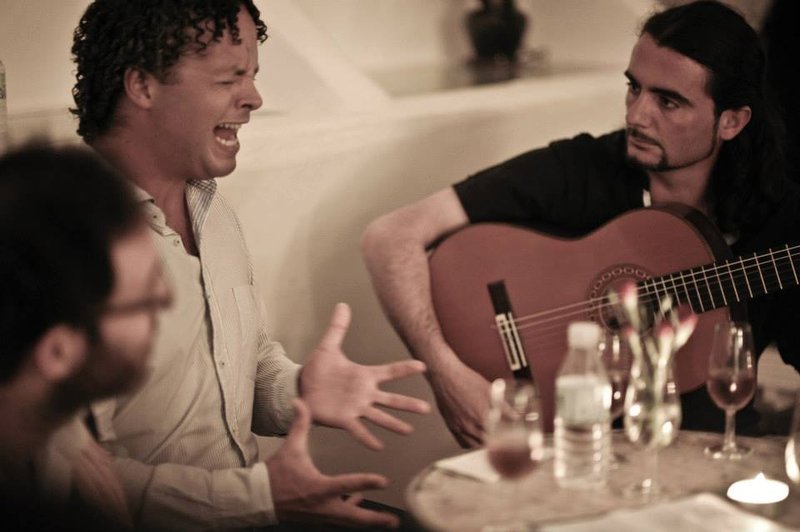 A guide to enjoying Sherry Wine and flamenco music:

Fino and Bulerías from Jerez

Fino: Aged in “soleras” (stacked tiers of wine casks) for approximately 4 years, Fino has a pale, straw-like colour and a delicate, almondy aroma. Sharp but not acidic, it is very dry and light on the palate. It is biologically matured under a film of yeast called “flor”.

La Bulería from Jerez: just like Fino, bulerías have a sharpness to them, reaching such a point of vocal expression as to awaken our senses. Although of a festive nature (light), in Jerez the bulería also has a dry side to it, since many of its lyrics reflect tragic themes—a paradox to find in such a festive style.

Amontillado and the Bulería por Soleá

Amontillado: arises from the combination of two ageing processes. Its initial, biological ageing process is followed by oxidative ageing. It therefore has the character of a Fino (pale and pungent) but with a fullness and complexity that softens its vivid intensity. Amber-coloured, very dry and with delicately pungent hazelnut aromas.

Bulería por soleá: pairs perfectly with the depth of an Amontillado because it is a style of singing and guitar-playing that is in between two styles of flamenco. It is partly bulería but it is also tinged with soleá—a slower cadence that reigns in the festive impetuousness of bulería in favour of greater repose. Exquisite balance.

Oloroso: this wine undergoes oxidative ageing after an initial stage under flor, accentuating its maturation in American oak wine casks.  Oloroso has a golden, amber colour with a well-rounded set of characteristics: hence, a powerful bouquet. It is flavourful and persistent in the mouth, the noble wood notes creating an elegant dry finish.

Soleá: considered the first fully-defined style of flamenco, thanks to the harmonious blend of all its aesthetic concepts. Its slow but rhythmic cadence balances perfectly with its many references to experiences fully lived. Just like its pairing, a soleá also needs more prolonged exposure to time in order to age like an Oloroso.

Palo Cortado and the Seguiriya

Palo Cortado: somewhat shroud in mystery due to its irregular ageing. As a general rule, it “delivers” more than what is actually sought after. Amber-coloured with golden highlights and an intense, nutty bouquet reminiscent of toasted almonds and hazelnuts, enrobed with notes of old wood. It has an intense and persistent palate, with toasted nuances.

Seguiriya: of all the songs and guitar-playing styles of flamenco, this one reflects a mysterious irregularity in its verses. It expresses pain with intensity and persistence, with full-bodied expression and, just like a good Palo Cortado, needs a generous amount of rebellion to become what it is.

Cream or Sweet Oloroso: the English term “cream” is used to define a sweet Oloroso wine. Produced from the blending of Oloroso with the sweet Pedro Ximénez variety. Full-bodied with a warm, mahogany colour, it is both smooth and elegant on the palate.

Natural fandango: has the expressive power of the most assertive of singing styles (Oloroso) while its rendition has nuances of sweetness reminiscent of its folkloric origins (Pedro Ximénez). It conveys daily truths that are told with such sublime sweetness to be attractive to one and all.