Copa Jerez Forum 2019 brought together sommeliers from three different continents and set the stage for them at Jerez’ Villamarta Theatre. There, they shone in the spotlight, analysing how Sherry Wines fit into their culinary programmes at European, Australian, Japanese and North American restaurants. Each and every one of them coincided on the importance of one first, basic step: training servers and maitres about Sherry Wines. A well-trained sommelier or server has a special sensitivity towards broadening guests’ horizons by bringing new wine-tasting experiences to the table. A sommelier who knows about the world of sherry and enjoys its qualities is unquestionably the best possible ambassador to convey that experience to clients.

This year’s Forum put sommeliers in the limelight and paved the way to discovering how Sherry Wines rise to the pairing challenge every single day. Miguel Ángel Millán, José Antonio Navarrete and Juan Ruiz pair Sherry Wines with cuisines as daring and different as that of Quique Dacosta,  David Muñoz (Diverxo) or Ángel León (Aponiente). It was truly rewarding to witness the respect and admiration these professionals express when referring to Jerez Region wines.

The history behind Sherry Wines and Manzanilla de Sanlúcar is prolific and although some may think that all has been told by now, Copa Jerez Forum 2019 proved them wrong—there is still much to learn and discover about these wines. Josep Roca gave a keynote presentation which delved deep into the relationship between the human palate, food and Sherry Wines. He spoke about details such as the texture chosen by chefs to serve a certain kind of food and how that texture on the diner’s palate affects the way they perceive the wine that accompanies it.

One of the features of Copa Jerez Forum is that at nearly all the sessions, attendees are able to taste the food and wine first-hand and test the speakers’ theories for themselves. This requires a huge amount of work by Copa Jerez staff in order to ensure that everything runs smoothly, on time and for the enjoyment of all, both in the audience and backstage. One of the common myths dismantled this year was that aged red meat goes best with red wine. Aladino Juan, from Cárnicas Lyo, along with sommelier Cristina Tierno and journalist Alberto Luchini, demonstrated that the real deal is to accompany the intense flavours of aged meats with sherry. Attendees sitting comfortably in their seats at the Villamarta Theatre got a taste of that! An aged Manzanilla with a 300-day aged cut of meat? Well, yes indeed! The flavour of the meat was heightened exponentially with the first sip, its ripe buttery notes and nuttiness making Manzanilla a perfect pair. And an Oloroso or Palo Cortado with meats aged for 800, or even 1,500 days? Why, of course! The speakers’ faces were the telling reflection of the answer to that question…So, why not break away from old habits and order a Sherry Wine next time with your aged meat entrée?

Something similar occurred when Canadian “CRÉATEUR D’HARMONIES” François Chartier took to the stage. For years, he has been revolutionising the world with his molecular matching theories. So, although it is widely accepted that Cream and Palo Cortado pair particularly well with chocolate, Chartier proved once again that there is still much to be learned about Sherry Wines and that an open mind, free of preconceived ideas, is the best approach. His proposal of pairing Fino with chocolate left more than a few attendees delightfully amazed.

The Forum came to a close with an extraordinary artistic flair. The stage filled with flamenco, the gourmet cuisine of a Michelin-starred restaurant and the history of Sherry in a glass. The entire theatre was overtaken with emotion as Juan Manuel del Rey from Corral de la Morería gave his presentation. A Sherry of the highest order brought a tablao flamenco from Madrid to the capital of the Jerez Region. This was a round-trip experience that went far beyond pairing food and wine—it was a pairing of emotions for everyone—speaker, artists and attendees alike..

The day after the Forum, the seven competing restaurants from their respective countries faced a Copa Jerez Competition like never before—cooking live onstage in a classical theatre like the Villamarta. The morning was a whirlwind of cookery, wine-serving and stage nerves—all in front of an international panel of judges who had to choose the best pairing courses and decide which team would be the overall winner of Copa Jerez 2019. Jury chairman Josep Roca was clear from the very beginning, pointing out the vast difficulty that evaluating pairing menus from different culinary cultures entails. However, he noted that they all share a common affinity: Sherry Wines. 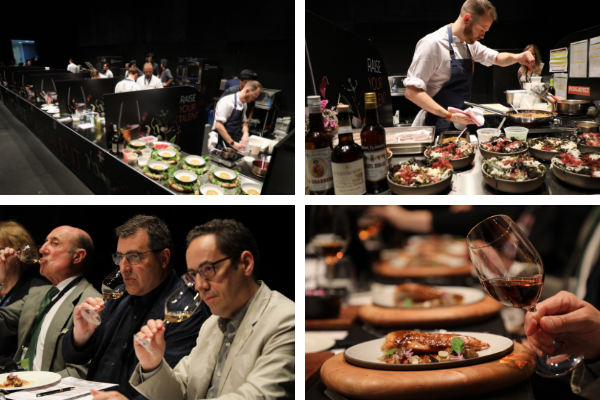 The day was absolutely packed with passion, ceaseless work and artistry by all the teams who, toiling in sync, left us one vibrant moment after another. The winner of this year’s edition was Clou, from Copenhagen, Denmark, represented by sommelier Jonathan K. Berntsen and chef Martin G. Sørensen. The Juli Soler Award for Best Sommelier went to Enrique García from Spain, representing BonAmb restaurant in Xávea, Alicante.

Perhaps the best way to sum up these two days in Jerez are in the words of José Carlos Capel, food critic and founder of Madrid Fusión and jury member at Copa Jerez, as they appeared in his El País newspaper column: “Copa Jerez Forum & Competition is much more than food and wine, it’s the culture of culinary excellence at its finest”.

Now it’s time to put in practice all that was learned! See you at the next Copa Jerez in 2021!