Sunset Sherry: an afternoon drive through the vineyards of Jerez

Sherry is a unique wine, and like anything that is original it will have both its fervent lovers and its disregarding detractors. Its followers find a world of diversity within the sherry spectrum, and the newly initiated will ask of their more aquatinted friends a million questions. For both audiences, the connoisseurs and the amateurs, such questions may be answered in a tour around the vineyards of the ‘sherry triangle’, where they will learn that the originality of this wine lies in the originality of the land. 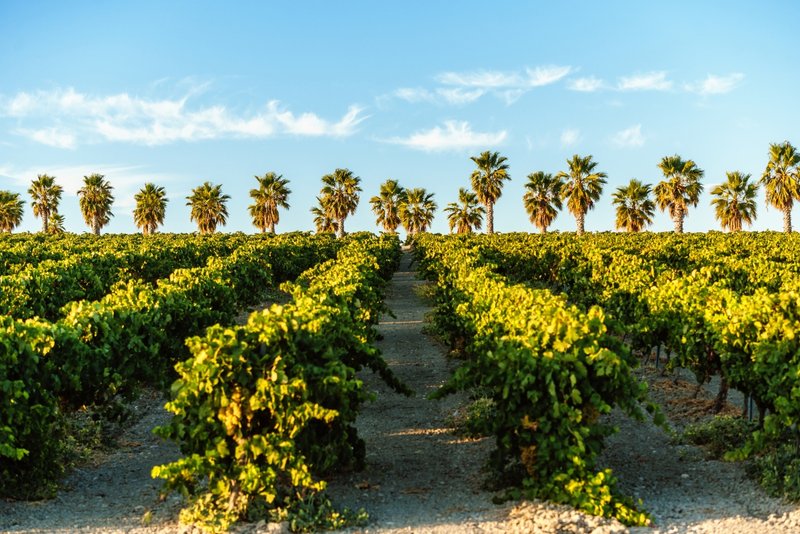 Just as sherry – or better said in the plural, sherries – is a diverse wine ranging from bone-dry finos to honey-sweet creams, from golden-shimmering manzanillas to black-tar pedros, so too do the viticultural terroirs, or pagos in Spanish, vary in climate, soil and sun. Joining Antonio from the Genatur tours, I take an afternoon drive around some of these pagos of Jerez. The vines around Jerez are short and gnarly, as the chalky white Albariza soil is dirt poor in nutritional content and water. But the ground-up seashells that Albariza is made of make this a calcium-rich soil, perfect for growing the the palomino grape, the grape used in making the drier drops on the sherry spectrum; finos, manzanillas, olorosos and amontillados. Further afield you will find the muscatel grape, grown towards the seaside towns of Puerto Real and Chiclana, where the soil is darker and richer. But in the sherry triangle it is palomino row on row, with the occasional Pedro Ximénez grape – used for making the sweeter creams, mediums and pure pedros – making a star appearance on the hillsides. The fate of the Pedro Ximénez fruit is not to be stomped under foot or press like the palomino, but to be left out to shrivel in the Andalusian sun to raise their sugar concentration. 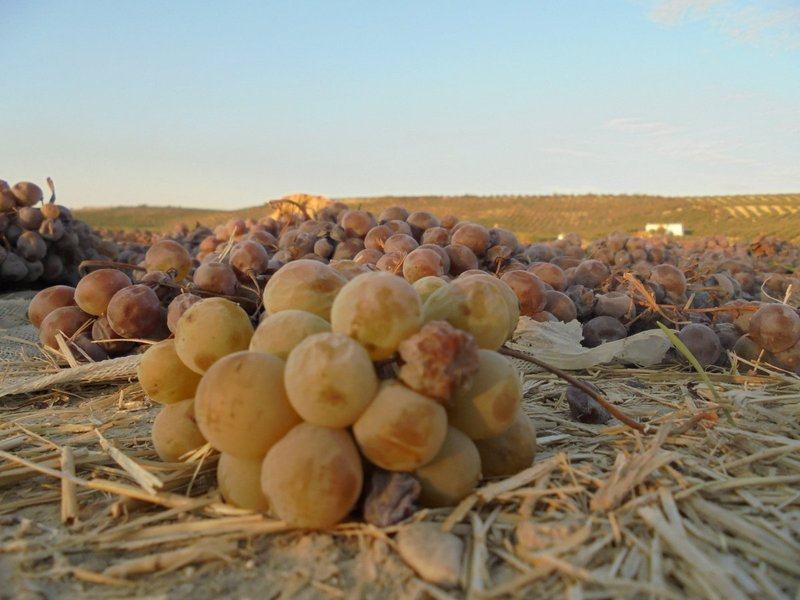 Struggling under the rays of a harsh sun, these stunted little vines receive from the sparse clouds little reprieve from dehydration, and so they send forth their roots searching meters down – five meters, ten, twenty, even thirty meters into the hills – into the spongey soil for but a drop of water. These roots are of New World stock, planted to protect the palomino vine above from the phylloxera disease below. Shooting out two arms into the sky, one arm is pointed south and the other north, thereby maximising exposure to the sun throughout the day. With their roots firmly planted in earth and their arms opening to the sky in a Christ-like plea to the heavens for rain, the vines sit and wait for the summer-time levante wind from the south to arrive and dry their bulging fruit, thereby raising the sugar-concentration levels to fermentable heights. And this year the summer wind came blowing in from across the sea early. It lingered there as the grape-pickers scrambled out to the vineyards to pick the fruit on time. The summer wind came so early, in fact, that the vendimia harvest celebrations were brought forward by about a month and many were left perplexed by the changing climate. 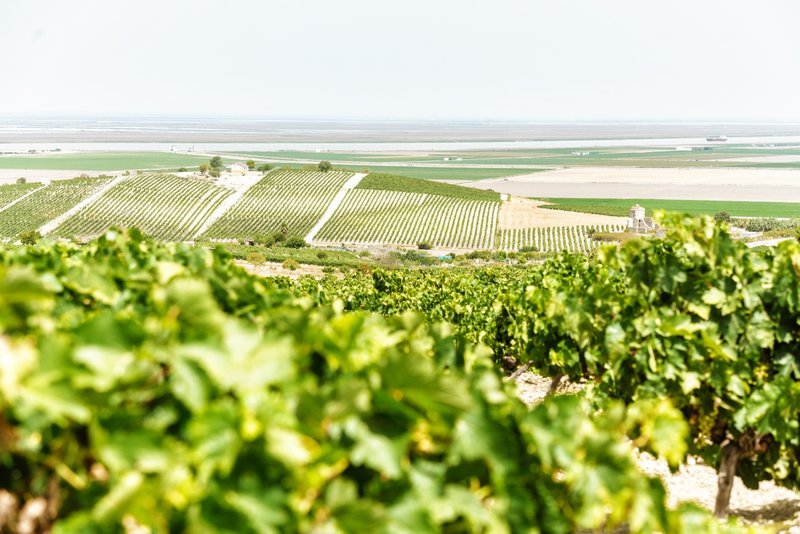 And just as the weather is changing, so too are tastes and prices; changes which have in turn altered the Jerez landscape from one of endless vines on rolling hills to a patchwork of mixed agricultural production. These days there are many vacant fields with lonesome horses clip-clopping aimlessly around where palomino vines once stood; a testament to the hard times that the sherry industry has been going through for the past decade or two of crunch and crisis. In other cases, the wine-grower has replaced the grape for the sunflower seed or even the cotton bud, crops which might attract a higher price at the market, and sometimes it may be just that the soil is not the right grade for palomino production. But what would poor old Omar Khayyam say to this, the man who wrote these lines just as Jerez, in his time known as Sherish, was booming under wine-loving sultans;

Tim Ginty is a freelance writer and English teacher based in Jerez de la Frontera, Andalusia. His blog, Lives and Times, is a fusion of writing on wine, travel, history, and society.