Jerez de la Frontera, October 6, 2020.The Regulatory Council for the Designations of Origin “Jerez-Xérès-Sherry”, “Manzanilla-Sanlúcar de Barrameda” and “Vinagre de Jerez” has just elected a new president and vice president at its extraordinary session, convened by virtue of the electoral process initiated last June 16 with a call for elections and has now culminated with the newly elected officers.

The session was chaired by Mr. Daniel Sánchez Román, Provincial Delegate for the Regional Ministry of Agriculture, Fishing and Sustainable Development. The newly constituted Plenary Assembly members also received their credentials during the session; ten representing wine-growers and ten representing the Bodegas(wineries). Throughout the session, many words of acknowledgement were bestowed on the outgoing President, Mr. Beltrán Domecq, whose work over the past eight years was described as brilliant by Provincial Delegate, Mr. Sánchez. Likewise, he praised the seamless and positive transition that characterised the entire process leading up to the renewal of the Regulatory Council, largely owing to the fact that nominations for office took a consensual approach resulting in single candidatures, thus streamlining the electoral process. Seven of the twenty council members are new to the post, so renewal not only affects the presidency and vice presidency but also a large number of council members.

César Saldaña (1961) is a native of Jerez and holds a degree in Economics from CUNEF – the University College of Financial Studies, part of Madrid’s Complutense University. In his professional career, he has focused almost exclusively on international wine trade and commerce. For over fifteen years, he held various top management positions at González Byass and Sandeman wineries, overseeing both the Sherry Wine and Port Wine divisions. He joined the Regulatory Council in 2000, then under the Executive Presidency of Luis García Ruiz. Until now, César Saldaña was the Regulatory Council’s Director General and also became Director of the Brandy de Jerez Regulatory Council in 2010 when the two institution’s operational structures were integrated.

César Saldaña is member of the food and wine advisory group at the Spanish Foreign Trade Office (ICEX) and also chairs the Andalusian Conference of Designations of Origin (CADO) and the Jerez Region’s Sherry Wine and Brandy Route, a wine tourism project involving over 100 companies established in eight towns in the Cádiz province.

Following his election, the new president stated that “after over 35 years dedicated to the sector and twenty years at the Council, holding the Regulatory Council presidency is both an honour and a huge responsibility. We face considerable challenges and the current circumstances are full of uncertainty. Nevertheless, I’m fully convinced that our D.O. has a very bright future ahead of it and the Regulatory Council must continue to be a solid foundation for everyone, wine-growers and bodegas, so that together we can move forward in pursuit of that bright future”.

REGULATORY COUNCIL OF THE DESIGNATIONS OF ORIGIN “JEREZ-XÉRÈS-SHERRY” AND “MANZANILLA-SANLÚCAR DE BARRAMEDA”.

The Consejo Reguladorfor the D.O. “Jerez-Xérès-Sherry”, “Manzanilla-Sanlúcar de Barrameda” and “Vinagre de Jerez” is the institution that oversees these Andalusian designations, comprised by 1,750 winegrowers and some 100 wineries located in the Jerez Region (“Marco de Jerez”) in the province of Cádiz, Spain. Sherry Wines and Sherry Vinegar offer many different varieties of truly genuine character. They have been exported for centuries under brand names that have, in themselves, become authentic icons of Spanish culture the world over. 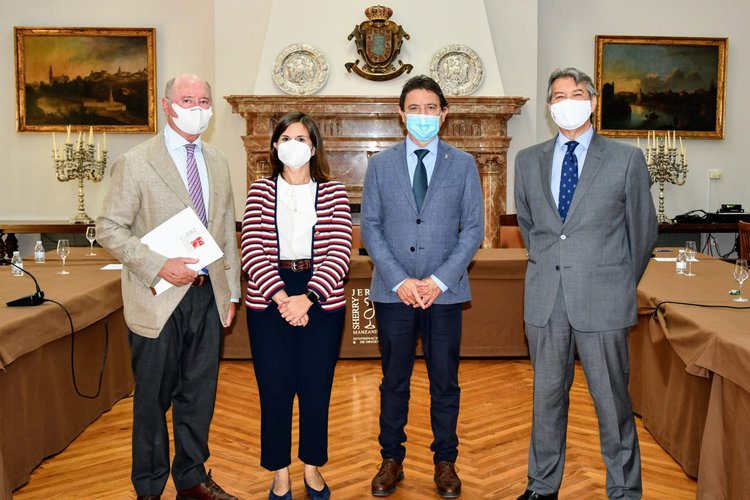