Barrels are an essential component in the production of Sherry. Despite their cost, and the availability of more modern containers for the storage of wine, oak barrels are still commonly found in wine cellars worldwide. And they’ve proved impossible to replace in the making of sherry.

When Gonzalez Byass chief winemaker Antonio Flores started work as a young man in 1980, there were around 19,000 barrels in the cellar, used for fermenting wine. That’s a lot of barrels to get to know. With the other winemakers, he’d have to go through each of these and have a look at them, tasting the contents so he could decide which sort of sherry each would be used to produce.

‘The classification task was quite extraordinary,’ Antonio Flores says. 'There was a team of 5 people who visited 500 barrels a day, and their hands were corrugated by the end of the day just from the moisture of the wine.’

Three decades later, and the process is somewhat easier for Antonio: at Gonzalez Byass, just 200 casks are barrel fermented, while the rest of the wine is made in stainless steel tanks before going to cask. Still, though, oak is vital in sherry production, and the cellars of bodegas are stacked full of barrels.

While a few companies, such as Valdespino, still do quite a bit of fermentation in barrel, since the advent of stainless steel tanks with efficient cooling, most do the fermentation in these tanks, which allows for a clean, controlled fermentation. But it hasn’t been possible to make decent sherry without barrels, and once the wine has been fortified, that’s the way it is aged.

Traditionally, the grapes would have been harvested in September, and pressed, with the juice then going to barrel. Fermentation would start naturally, and by December it would be clear what the destiny of each barrel would be. The barrels would then be racked (which involves decanting the contents off the layer of dead yeast cells at the bottom of the barrel) into a fresh barrel, and alcohol added. For those wines destined to be Fino/Amontillado, it is added to make the wine 15.3% alcohol, while for those to be aged oxidatively, it goes to 18%. While the wine is still on its lees, it’s called Sobre Lias; once it has been taken off its lees and fortified, it’s known as Sobretables. 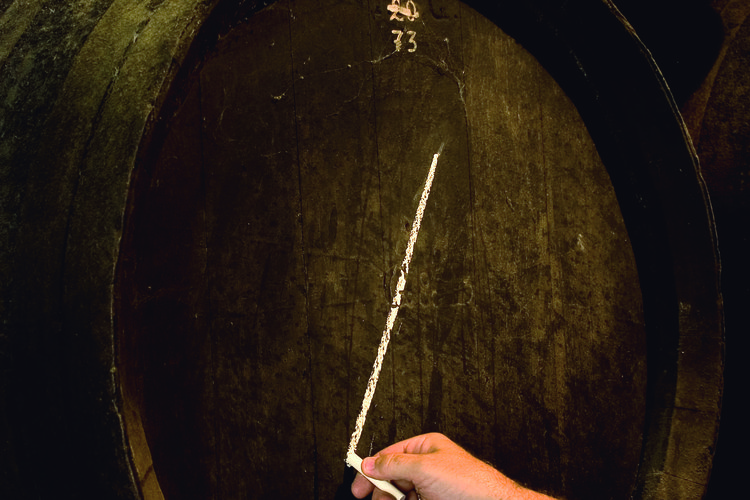 Most Sherry is aged in 600 litre barrels known as butts.

Typically, these are painted matt black so that any leakage is apparent, and unlike other winemaking where barrels are used for just four or five years, sherry barrels are kept forever, and repaired as necessary. The barrels are made exclusively of oak, and while Spanish and Eastern European oak is sometimes used, most of these barrels are made of American oak, which is Quercus alba. When the oak is new it has a significant flavour impact. In normal winemaking, this is often seen as desirable: for example, classic Rioja is appreciated with a touch of coconut and vanilla from the American oak. For sherry, however, neutral barrels are required, and the newer ones are used for fermentation. For the more delicate styles, Fino and Manzanilla, it’s best to use barrels at least ten years old to minimize any intrusion from oak flavours.

The reason oak barrels are hard to replace is that they create the perfect conditions for maturation of sherry. Oak is not completely air or watertight. The limited, gradual influx of oxygen through the staves allows the wine to age gracefully. The amount of oxygen entering depends on the thickness of the staves and the volume of the barrel: for larger barrels, the surface to volume ratio is much lower and so the wine inside sees less oxygen. Normal wine barrels are around 225 litres, but Sherry butts are usually more than twice this volume. The contact of oxygen that comes through leaving the top part of the barrel unfilled also allows perfect conditions for the layer of yeast cells called flor to grow on top of the wine, for biologically aged sherries. In a typical cellar a barrel will also lose liquid. This is known as the ‘angels’ share’ and it’s normally around 4% of the volume each year. This concentrates the flavours of the sherry.

The positioning of the barrel in the cellars is also important. Some warmer areas are best suited for the oxidative ageing of Olorosos, whereas the cooler parts of the cellars are best for preserving the flor layer on Finos and Manzanillas.

After a year or two as an añada (a vintage wine), a barrel will enter the criadera, which is the stack of barrels that is used to form the solera system. The solera is the lowest and last level in these barrels, where the wine is taken out for bottling. At regular periods, wine is removed from the solera, and taken to be bottled. The wine removed is replaced with wine from the higher barrels, which is younger, and the process is repeated. This blending of young and old wines is important, because nutrients from the wine in the younger barrels helps to keep a healthy flor growth.

The winemakers still have to visit each of the barrels, because they all develop differently. There’s a special code that each uses which indicates the quality level and where the barrel is in its development. While much of this code – marked as a symbol in chalk on the end of the barrel – is held in common among the different houses, individual cellar masters might have their own twists on it. Indeed, the skill of the cellar master is in knowing exactly what is in each of the barrels, and then using this knowledge to blend wisely.

Finally, sherry barrels are highly sought after by the whisky industry. Back in the 1860s, large quantities of sherry began to be shipped to the UK in barrels, and because it wasn’t economical to return them, they were sent to Scotland for use in maturing whisky. The sherry barrels contribute what is known as a ‘sherry finish’ to the whisky, and this is so desirable that some whisky houses actually buy barrels, given them to sherry bodegas to use, and then take them back for maturing their whisky in.

Jamie Goode is a London-based winewriter who is currently wine columnist with UK national newspaper The Sunday Express. As well as writing he also lectures and judges wine. He won the 2007 Glenfiddich Wine Writer of the year award, and contributes regularly to a range of publications including The World of Fine Wine, Wine Business International, Drinks International, Wines and Vines, Sommelier Journal and The Drinks Business. His first book, Wine Science, won the Glenfiddich Award for Drinks Book in 2006, and a second edition was released in 2014. Jamie has also made numerous presentations and lectures, conducted many tastings and is an established wine judge (panel chair for the International Wine Challenge, among others). He was one of the organizers for the International Sparkling Wine Symposium (March 2009, November 2011, November 2013). Jamie came to wine writing by a rather convoluted route, via a PhD in plant biology and several years of working as a book editor, before he began publishing wineanorak.com, which is now one of the leading wine websites. He has also appeared on TV (Richard and Judy, Sky News, BBC1, BBC Breakfast, BBC News Channel and Channel 5 News).