About the authors:  Olga Nikandrova & Denis Shumakov are based in Pskov, Russia. Tea and Sherry are two of their favorite drinks. Tea was first.  Together they work with the “Turquoise Tea” company, organising tea tastings, festivals and championships (Denis is the Chairman of the Advisory Board of Tea Masters Cup), and write articles about tea.  Their first Sherry was paired with tea, but very soon Sherry turned into a freestanding family hobby. Their passion for Sherry inspired them to create a website in Russian focussed on promoting the wines to the Russian audience aboutsherry.info

Let’s start with drink-and-drink version. Combining black tea with sweet Sherry is a rather obvious idea which may be applied not only to Sherry. Many other sweet wines can match black tea on the same principle as jams, confitures, dried fruit and other traditional tea snacks do. This principle — “wash down something sweet with something warm” — is simple and good; varying teas and Sherries you can get a rich range of combinations, from common to exquisite ones. Once we had a series of tastings, pairing P.X. with different teas, the results were satisfying, but we came to the conclusion that a simple combination of “Sherry + tea” did not reveal the potential of gourmet tea and sherry compositions in full, even when using the choicest teas and best Sherries. The composition should be more complicated (attention! here we start moving to food-and-drink-and-drink pairing). For starters, an obvious way may be used — adding a snack which would match both tea and sweet Sherry.

Nuts may be a simple variant of such snacks — almonds, hazelnuts, pecans, macadamia and others. We settled on macadamia added to the composition of Pedro Ximénez and Taiwanese Ruby Black Tea. It was light, dainty, neat, smooth and cozy — a good composition for quiet evening reflections.

If you want to make the tea-sherry-nut theme more festive, it is enough to turn to the side rarely addressed to in food-and-wine pairing — the Islamic East.

Very strong Turkish black tea in a traditional bardak-glass, Lebanese sweets (mainly with honey and pistachios) and any rich sweet Sherry will make a composition with outstanding visual properties and fantastic taste, which reveals all nuances of sweetness. For this composition to work perfectly, you need to first taste some snacks, then make an immediate sip of Sherry, and after a short while chase it with a bit of tea. Turkish tea with its uncompromising roughness and dryish bitterness will work as a drink, fostering subtlety of perception — after making a sip of it you can repeat everything on a new level of pleasure. Until you run out of sweets.

Another type of snack that works well with both tea and sweet Sherry are chocolate cakes and pastries. Let’s try it! 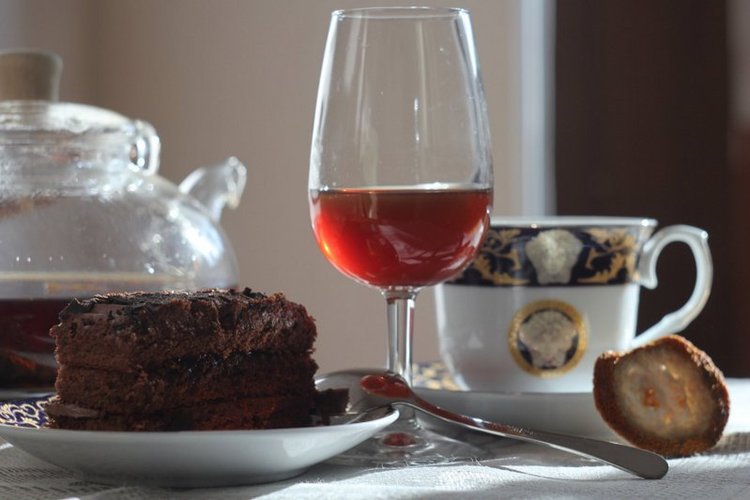 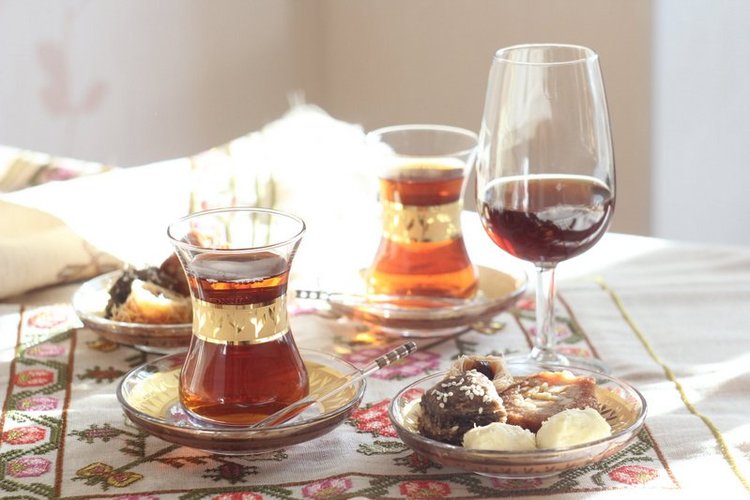 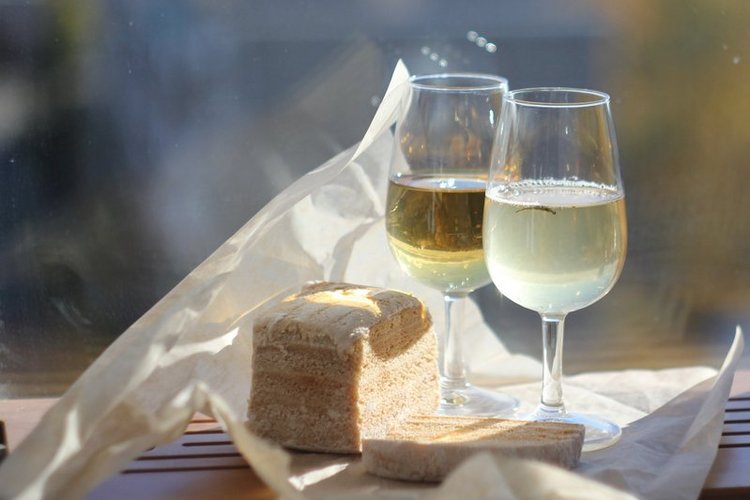 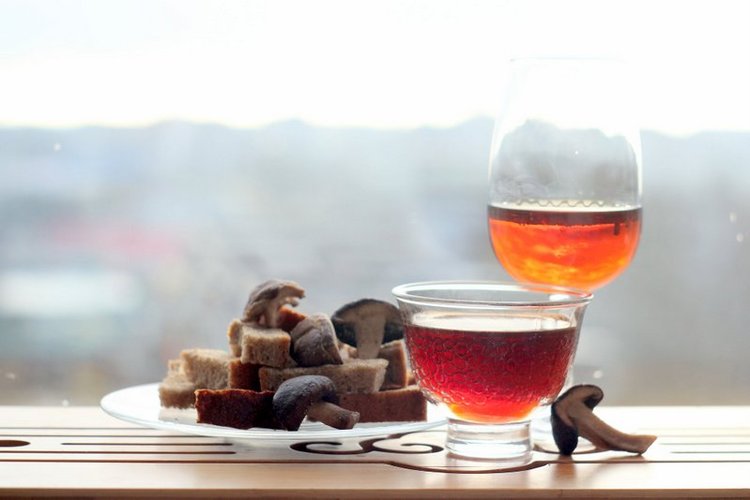 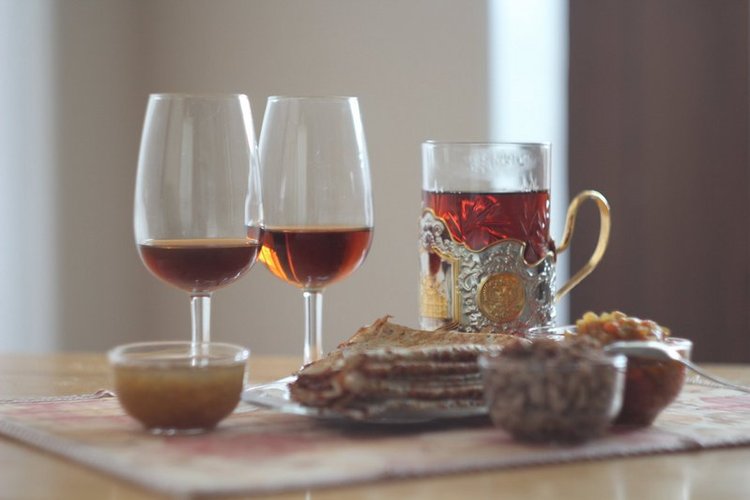 Take a piece of chocolate cake interspersed with flakes of dark chocolate. Serve it with a glass of Moscatel and brew a pot of black Ceylon (Sri Lankan) tea, adding a few dried peels of bergamot orange (no Earl Grey or other bergamot oil — just peels). Pour the tea into cups, let it cool a little, take a sip, then a bite of the cake, then Moscatel… A short pause — and repeat! It’s delicious from the very start, but the idea of the composition, on the whole, becomes clear on the fourth round.

This composition reveals different facets of bitterness. The astringent bitterness of Ceylon tea, the citrus bitterness of bergamot orange, the austere bitterness of chocolate and alcohol bitterness of Sherry compensate for one another — and the focus shifts from the bitterness to its shades. Sweetness in Moscatel and chocolate cake is mitigated the same way — and citrus notes are fully triggered in the wine being supported by bergamot. In this composition, Moscatel acts as a refreshing drink — which is great, as fresh notes are often present there, but rarely allowed to reveal themselves.

The development of the theme of “sweet sherry + black tea + snacks” may be endless.

There are plentiful wonderful snacks which would either harmonize with or contrast against tea and Sherry. Picking at different teas and adding on-spot tea aromatizing in the siphon one can get an almost infinite number of possible compositions with high show potential. Infinity is rather too tough for us, so we decided to get away from the basic idea and work with dry sherry.

In terms of tea pairing, Fino and Manzanilla are, of course, the most difficult cases — there is a huge gastronomic gap between them and hot black tea. But, luckily, there is more than hot and black tea. Thus, for example, white tea may be infused in room-temperature water. In 20-30 minutes of “cold brewing” you can get a nice refreshing drink with a subtle taste – evident but light notes of fruit and dry freshness. This gives an opportunity to rhyme it with dry biologically aged sherries. We liked this variant a lot.

Needle-type white tea infused for 30 minutes in cool water, room-temperature Fino and classic pure-apple Belyovskaya pastila (apple paste layered pie). All parts of this set combine well with one another in pairs — including the pair of cool white tea and non-refrigerated Sherry. But all together they create a perfect and self-sufficient composition, where, speaking poetically, all autumn themes are played upon: cool freshness, muted fruitiness, soft fading and enlightened quietude. Such a composition can work as a аpéritif as well as a digestif or a separate service for an arty show-off. We want to stress once again that the wine does not need to be refrigerated in this case, and that it is best to use Fino en Rama, Manzanilla will also do very nicely, of course.

It was a bit easier to find a good match for Amontillado — the key for the pairing was its mushroom theme. Shu-puerh aged in Taiwan and cooked in the siphon together with one shiitake mushroom crisp and rye-wheat dried breads made a rough but very warm and homey composition with Amontillado. Dried breads reveal light bread notes of Amontillado, compensate them and bring to the fore an otherwise neglected fresh note of spices. Which (tea-people will understand us here) is just the thing to wash with velvety shu-puerh and its light mushroom note.

The siphon having been brought into action, it was very difficult to refrain from outright “perversions” — so in no time we concocted a tea composition with Brandy de Jerez.  It is as easy as this. Taiwanese Ruby tea should be siphoned with half a vanilla pod. The drink is then poured into a glass tea-bowl and put next to a glass of old Brandy de Jerez. Let the tea cool down slightly, smell the brandy, trying to catch the notes of vanilla which gives the barrel (an almost unsolvable task) — then take a sip of tea, where, in taste and flavor, a vanilla note is subtle but well perceptible. Then smell the brandy again — and take another sip of tea. And so on… This way of consumption — when tea is for drinking and brandy is only for smelling — would perfectly fit small tea and sherry shows as a beautiful final chord.

Speaking about shows. Tea and Sherry compositions are a good idea for northern Sherry consumers, especially for Russia and Great Britain with their rich and comprehensive tea cultures. In Spain, a non-tea country, they can become an interesting asset for winter tastings. The idea of Christmas tea and Sherry get-togethers has warmed our hearts for a long time.

Sorry for the distraction. After quite an austere composition with Amontillado we wanted something absolutely reckless — and we called to mind our experiments with Oloroso, Palo Cortado and Russian cuisine. In those experiments, Oloroso and Palo Cortado revealed their unexpected “dressing” side and proved to be practically all-purpose drinks with rich and hearty dishes. So what is the richest and heartiest food to serve with tea? Right! Thin wheat pancakes with different fillings.

Write it down. Pancakes, ground beef, vegetable marrow spread, red caviar, golden raspberry jam, black tea and minimum two Sherries: a dry one (Oloroso, Palo Cortado, maybe even Medium) and a sweet one (Cream, Pedro Ximénez, or Moscatel). Put all these items in large amounts onto the table with a small company of people around it and, filling pancakes with different ingredients, taste all possible combinations of the mentioned things as long as you can.

It has become our favorite breakfast.