In the foodie world, it’s oft repeated that Champagne pairs with everything. That’s false. Champagne is good enough to drink with everything, but it’s really Sherry that takes the mantle as the best pairing beverage—it truly goes with everything. But why not put my money where my mouth is? In this short series, I’ll drink Sherry with a range of popular and hard to pair foods and find out what works and what doesn’t. Far from science, this is one man and an arsenal of Sherries. However, like science, I encourage you to try and replicate the results.

I’m sorry to say this but this article’s headline is misleading. It’s somewhat a misnomer to say I paired Sherry with blue crabs. First, once steamed, blue crabs turn red. Second, the spice blend used in cooking crabs where I grew up in Washington D.C. and Maryland—Old Bay or J.O.—can be more important to the pairing than crabmeat itself. (The crabmeat alone would pair with a multitude of wines, riesling comes to mind.) Third, no matter what pairing I do, it hangs in the shadow of the singularly best pairing with steamed crabs—a crisp lager. By the pitcher, of course. The pairing of beer and crab is as much a function of the ease at which the malty beverage boosts the sweetness of the crabmeat as the bubbles and crisp finish wash clean the heavy spices.

None deterred, I grabbed a few bottles of Sherry and got to work at a new crab shack pop-up in D.C. called Cappy’s Crab helmed by chef Johnny Spero. I’ve been eating crabs since I was a child and so I’ve developed a method for tearing them open swiftly while extracting most of the meat. It’s an art to itself, one that I’ll share at another time. But I have only the fondest of memories of our summer crab feasts, mallet in spice-crusted hand, fingers cut from tiny pricks of the shell. It’s a ritual I could not go a summer without.

Once I had opened the shells, and created a small pile of meat, I tasted through the Sherries. My first instinct was that Fino could do the job, especially En Rama. En Ramas have less filtration, which I thought would hold up to the fatty crabmeat, born of chilly Atlantic waters. Instead, the yeasty, round Fino overwhelmed the crab while seemingly trapping the spices on the tongue, leaving a taste reminiscent of warm beer. 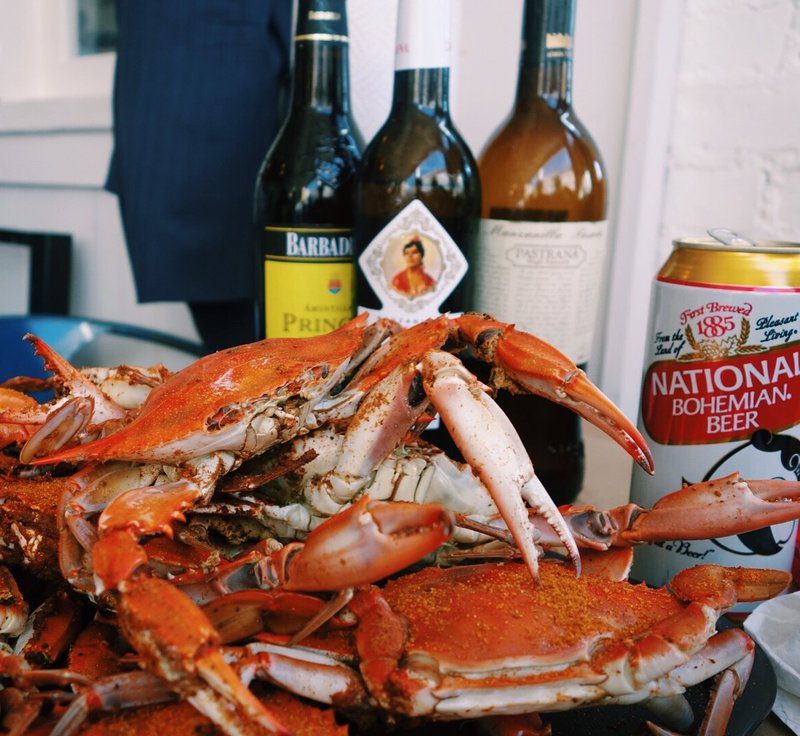 Up next was an Amontillado, which I’ve paired with large prawns to accentuate the sea flavor and boost the umami factor to a good effect. Unfortunately, it fell flat too, causing the fresh meat crab to taste preserved. A Palo Cortado from Sanlucar de Barrameda, where the bodegas are close to the ocean, was a wild card, adding a note of maple syrup. It’s a pairing I suspect some would appreciate but lacks the zip necessary for a warm summer day when crabs are best.

Lastly, I pulled out a crisp Manzanilla, still sweaty on the sides, having been plucked from the ice bucket. Not only was the pairing a success, and the salty tang of Manzanilla lifted the spice—with red peppers, bay leaves and celery salt especially dialed in—it washed away the spices immediately after leaving a clean, salty finish, reminiscent of the sea tide pulling in and out. I’d found a winner. And while I don’t think I’ll give up beer during our summer feasts entirely, keeping a super cold bottle of Manzanilla on hand may just become a new summer ritual.