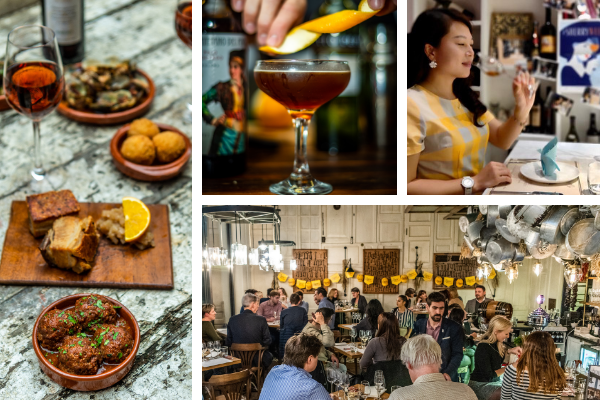 Highest ever number of participating countries

Sherry Week 2019 saw six new locations for events: Dubai, Portugal, Thailand, Kazakhstan, Malta and the Isle of Man, with a total of 40 countries and dependencies around the world.

The country hosting the most events this year was Spain, home of Sherry wines, with more than 1,100 tastings, pairings and other opportunities for Spanish Sherry-lovers to enjoy their favourite tipple, followed by the UK with nearly 500 events. Next were Japan, Brazil, the US, China and the Netherlands.

Most popular events: pairings and tastings, thanks to close involvement by Sherry bodegas

Teams from the bodegas (Sherry producers) actively participated in introducing Sherry wines to new markets in the Mediterranean, Middle East, and Central Asia. This engagement by bodega professionals, travelling across the world to spread the message, helped to bring Sherry to an audience thirsty to try Spain’s most intriguing wine.

The most popular types of events were pairings, which show the versatility of this fortified wine from southern Spain so effectively: Sherry wines match with a wide variety of foods, from cheese to chocolate, seafood to game. The biggest increase was in retail events, tripling last year’s figures with over 600 events held at wine stores. 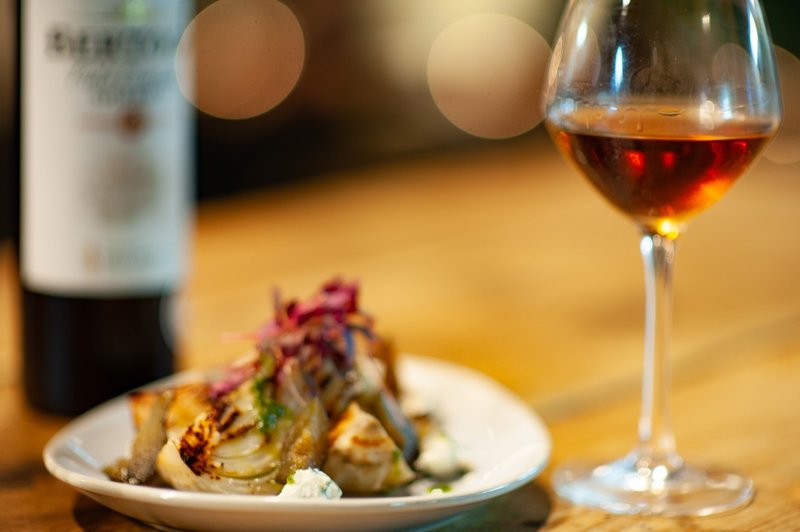 In addition, nearly 600 informed guided tastings were held, at wine stores, bars and restaurants. These events counted with the expert leadership of over 50 Certified Sherry Educators and representatives from the Sherry bodegas. 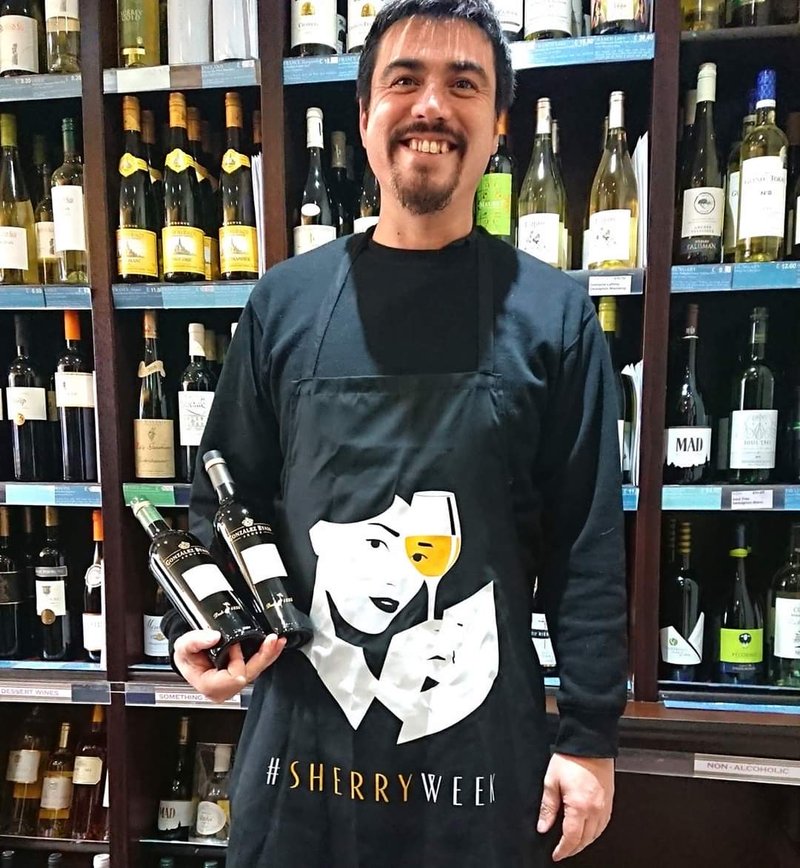 Sherry Week continues its strong presence on Social Media with the hashtag #SherryWeek. Instagram is now the principal SM channel for the Sherry Week campaign, being the home of gastronomic imagery, followed by Twitter and Facebook.

In total Instagram and Twitter saw 7,082 #SherryWeek posts over the seven days, with a potential impact of 25 million (Source: Tweetbinder). Instagram saw 36,738 Likes on #SherryWeek posts, a phenomenally high engagement rate which demonstrates how effectively enthusiastic and passionate Sherry-loving Instagrammers communicate with their followers.

The viral pre-Sherry Week activity also contributed to the late rush of events, with more than 1,000 registered in the week before Sherry Week itself, spurred on by others’ activity and a desire to be involved in such an exciting event. 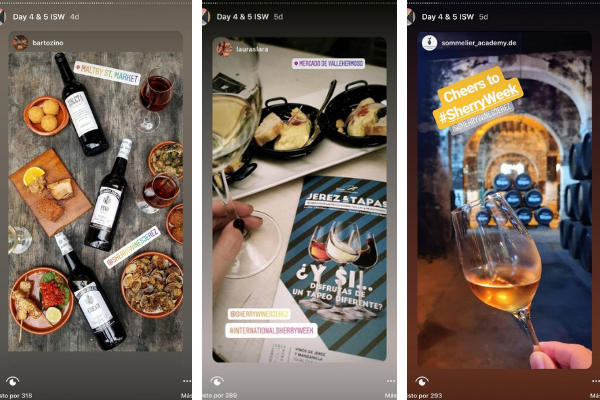 This year, Instagram stories (posts on the platform which are only visible for 24 hours) played a leading role in Sherry Week coverage. The @SherryWinesJerez IG account re-posted more than 500 Stories from participants around the world (now permanently accessible in the IG account’s Highlights).

However this data does not include Facebook posts or Instagram stories, where the use of #sherryweek cannot be measured, so the real SM total activity is considerably larger.

This annual event hosted by Sherry Notes, on 5 November, saw more than 700 tweets in one hour, with a total potential impact of 4 million. For the first time ever, two of the participants also streamed their own tastings live on YouTube, with another on Instagram; one of them, wine expert and digital marketer Julien Miquel of Social Vignerons has more than 315,000 followers across his SM channels. 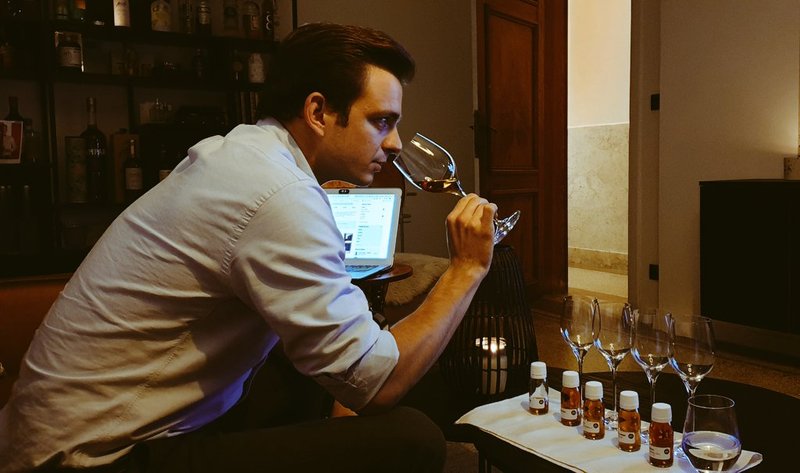 Starting Sherry Week on a high note, on 4 November, the bi-annual gastronomy Sherry-pairing competition Copa Jerez won the award for Best Promotional Initiative at the International Wine Challenge Merchant Awards. Copa Jerez is the world’s largest and most important Sherry-themed food and wine event, held in May every other year (the next is in 2021). 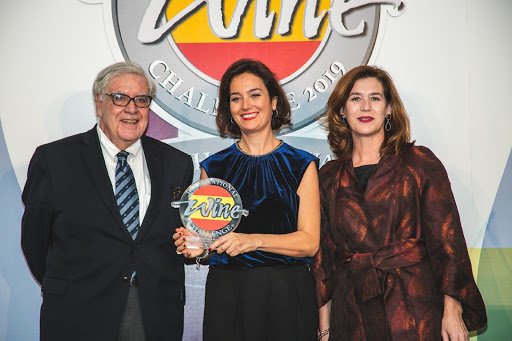 More than 50 bars and restaurants in Madrid participated in the first ever Jerez & Tapas route in five key gastronomic markets, as well as events guided by 20 Certified Sherry Educators.

Two major Sherry personalities, Cesar Saldaña and Pepe Ferrer, held a number of tastings in Madrid with more than 200 people in total, including 50 students at the prestigious Le Cordon Bleu gastronomy school - the next generation of chefs, sommeliers, and restaurateurs being baptised into the Sherry world.

In addition, the Consejo Regulador held a special Sherry Educator course in Jerez for 24 WSET-accredited educators from 11 countries as far afield as the USA, India and the Philippines. 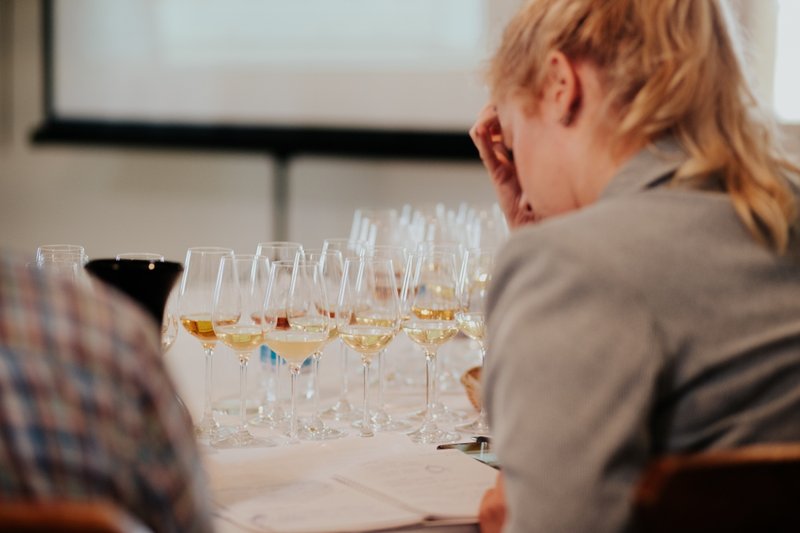 Retail events were a great success in London, with an average footfall of 200 people per store at 60 stores, giving a minimum of 12,000 consumers at the point of purchase. In-store tastings were held throughout the week, with a number of guided tastings and seminars across the UK sold out. 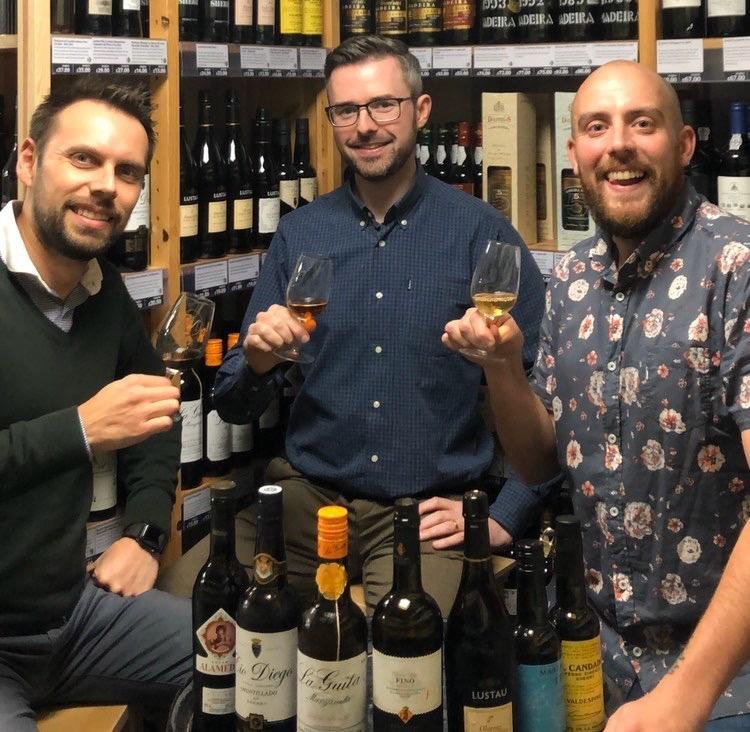 At the Sherry Party Sunset Cruise in Tokyo, 280 people enjoyed 300 styles of Sherry wines poured by certified venenciadores, as well as special sherry cocktails, and dishes prepared by four Sherry-loving chefs. This event was also attended by Virginia Miller of Sherry Explorers who travelled from Spain, and was sponsored by several Sherry importers. The team (Sherry Club, Fermintxo and Fermintxo Boca) will donate the profits of this event to victims of the Typhoons Faxai and Hagibis in Japan. 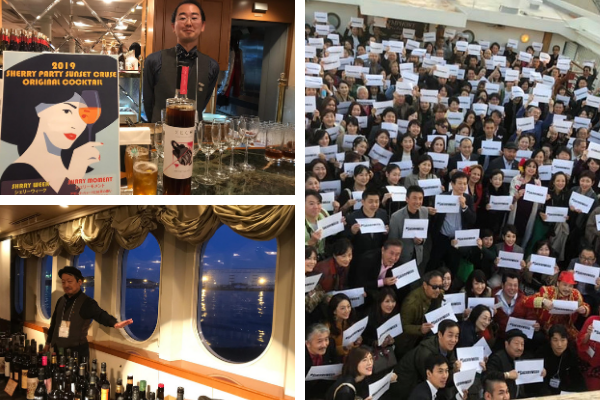 In the first two days more than 10 events took place, with over 100 people participating, including a masterclass with Sherry Educator Monica Zhou, and a course with her fellow Sherry Educator, David Liu, at JD University with 30 students. 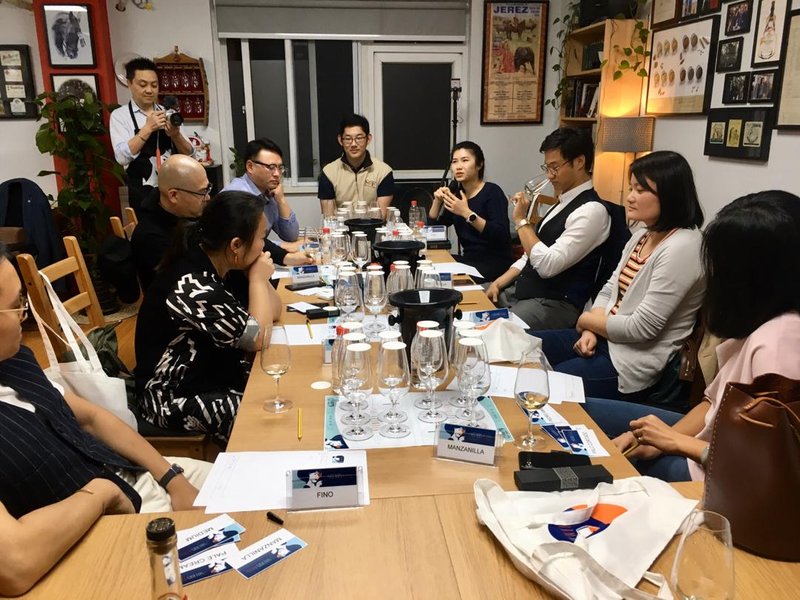 The winner of the Ayla Restaurant Pour & Pair cocktail competition was Max de Smit from The Suicide Club in Rotterdam. His winning cocktail, named Welcome Back, featured Pedro Ximenez Sherry, sake, kalamansi (Philippine lime), ginger syrup and egg white, and was paired with a sepia dish. Max’s cocktail will be available at Ayla throughout December. 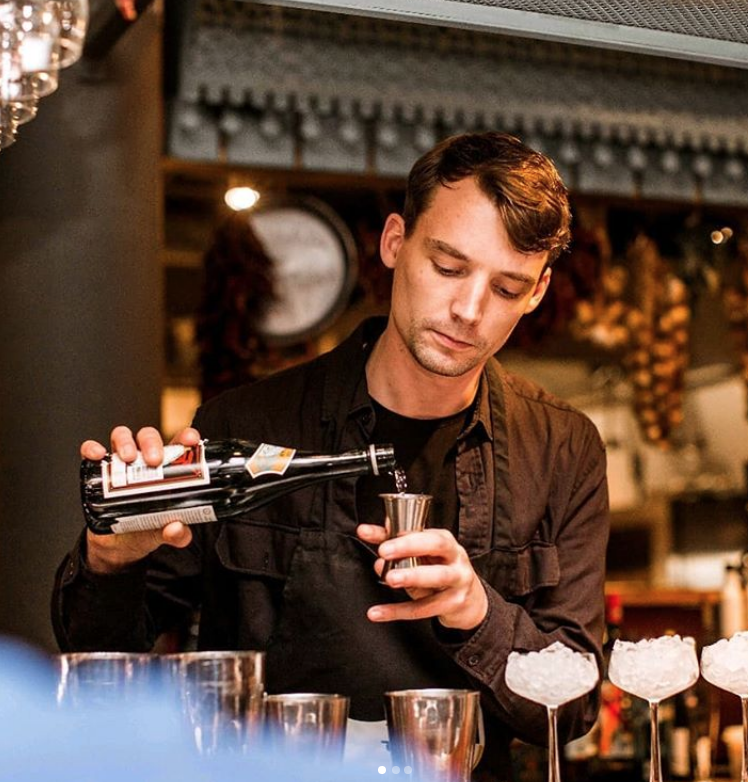 Max de Smit with his winning cocktail, Welcome Back.

This year, for the first time, two Spotify playlists were created for Sherry Week: classical flamenco, curated by the Sherry Wines team in Jerez; or a contemporary playlist provided by Kerin Auth Bembry, wine communications specialist, sommelier and previous finalist in Copa Jerez. 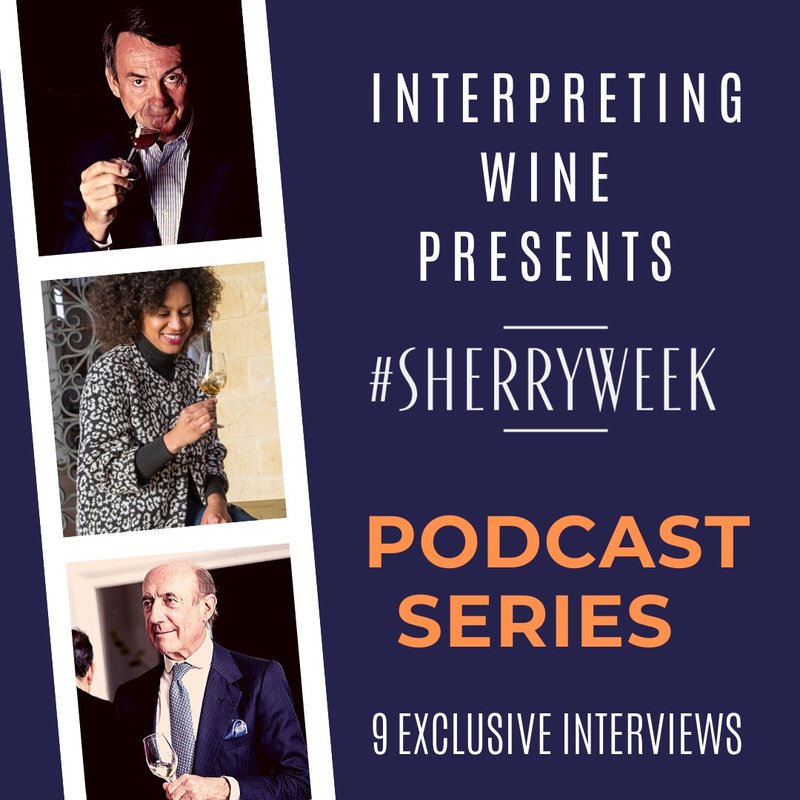 The entries for this competition are currently being judged, and the results will be announced later this month. Dishes include sea bass with seasonal vegetables matched with Palo Cortado; tuna empanada with Manzanilla; Turkish beef tartare with Medium; and chocolate ganache with Cream. 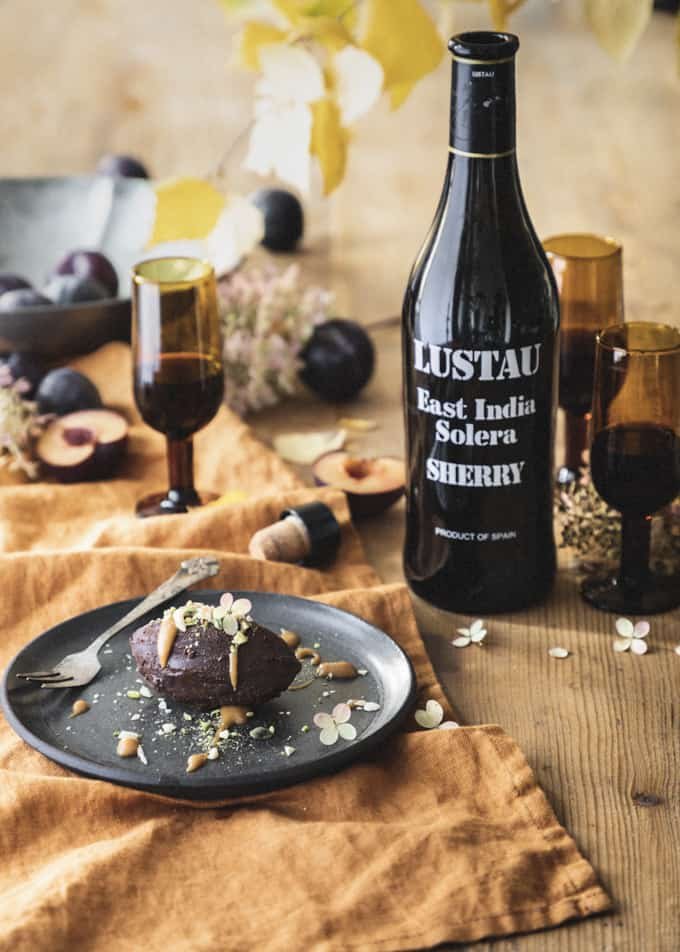 The winner of this event will be announced shortly.