Sherry Wines better than ever at 80

Mr. Beltrán Domecq, President of the Consejo Regulador, launched a message on Thursday to the wine industry while taking part in a morning talk show—namely, “Desayunos Informativos” broadcast by Grupo Joly. He said that an industry-wide effort is needed to establish a common strategy to convey a more modern image of Sherry Wines to the world, more in tune with the day and age we live in.

we need people to understand that Sherry is a wine, and although that may seem obvious to some, many consumers and so-called wine experts need to know more about Sherry as a wine, how to treat it as a wine—important unfinished business.”  Beltrán Domecqu President, The Consejo Regulador.

No sooner said than done. The Sherry Wine Council recently practised what it preached as it organised yet another edition of one of its most successful formats: the master tasting series at El Alcázar. This time the occasion was the presentation of the special edition collection of Sherry Wines to commemorate the 80th anniversary of the institution´s creation and approval of its Denomination of Origin (D.O.) regulations. The wines were selected from among a number of samples submitted by Jerez bodegas and were bottled with a specially designed label and logo for the occasion, reproducing in black and white the notes written on the wine casks on the different “andanas” or rows of wine butts, mimicking the effect of the chalk-written indications on the casks. Participants in the selection process were asked to submit samples to Consejo Regulador´s tasting committee, which then chose the wines to be part of the commemorative selection.

The scenario was set in the Patio de Armas of the Alcázar where the numerous guests were welcomed first by Jerez’  City Councillor for Cultural Promotion, Mr. Francisco Camas, followed by representatives from the Consejo Regulador. They proceeded to unveil the 80th anniversary special edition wines, selected from amongst all the samples submitted by Jerez Region bodegas and then bottled under a specially designed label, reminiscent of the chalk-written notes on the wine butts during the ageing process. The special edition collection is comprised of seven wines which will also be presented in Madrid, Barcelona and Cáceres, the latter being Spain´s Gastronomic Capital 2015 and home to the restaurant Atrio which recently represented Spain at the Copa Jerez International Final. 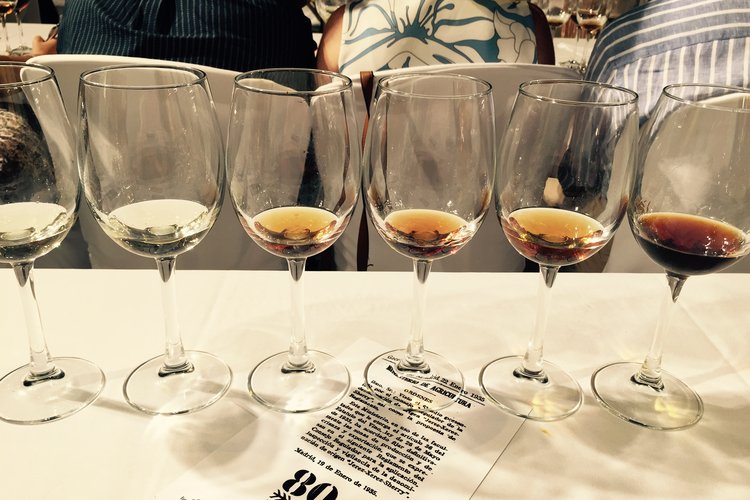 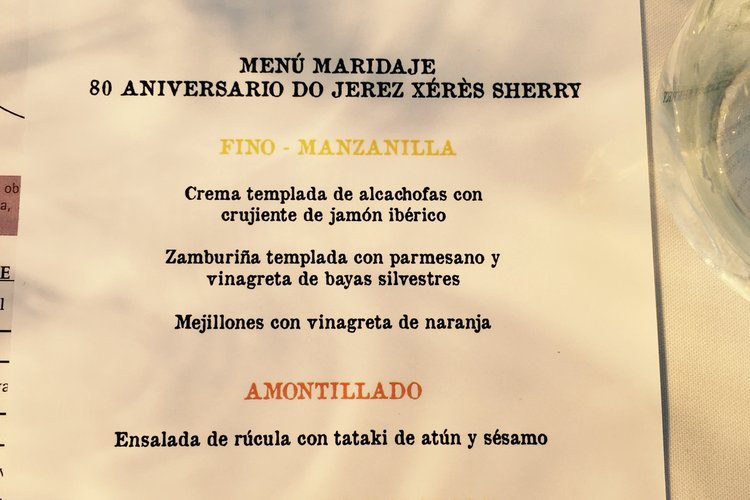 In the category of biologically aged wines, there is the classic “fino” from Jerez, with its very pale but bright and luminous straw colour, pungent bouquet and almondy and freshly baked bread aromas. The 80th anniversary “fino” is very dry, low in acidity, extremely fresh on the palate with a persistent aftertaste as a constant reminder of its biological ageing.

The ‘manzanilla’ fina, also biologically aged, has a pale straw-coloured hue and greenish reflections, an intense yet delicate aroma, reminiscent of green apples and floral notes. Light and saline on the palate with an elegant touch of bitterness, its aftertaste is long and fresh with a profusion of notes from its ageing process under a film of ‘flor’.

‘Amontillado’ is an authentic, serious Sherry Wine that undergoes both biological and oxidative ageing and stands out for its overall well-roundedness. Its bright colour ranges from topaz to amber, with a potent bouquet that ranges from floral notes and wine-soaked wood to roasted nuts. Both sharp and dry but structured on the palate, its extremely long finish is accompanied by a fragrant aroma of hazelnuts.

‘Palo Cortado’ offers an extremely luminous amber colour, prolonged tearing and a moderately pungent aroma. A highly complex wine, its bouquet includes notes of nuts, Virginia tobacco leaf and varnish whereas on the palate it is all elegance, well-balanced acidity and delicate citrus notes. Dry but highly glyceric, its long finish brings back a wealth of sophisticated retronasal expression.

‘Oloroso’ undergoes full oxidative ageing and ranges from deep amber to chestnut in colour, with greenish hues and prolonged tearing. It has a strong, nutty bouquet, reminiscent of wine-soaked wood, leather and varnish. Sweet and very structured in the mouth, it fills the palate with a smooth, warm passage followed by an extremely long aftertaste with returning notes of wood and nuts.

In the range of sweet wines, ‘cream’ is chestnut to mahogany in colour, dense in appearance with an oloroso-based bouquet that releases sweet notes, suggestive of citrus fruit and nuts, together with hints of muscatel grapes and raisins. It is velvety and rich to the palate, not overly sweet, and develops elegantly towards a long, very mild finish.

A ‘Pedro Ximénez’ rounds out the selection with its impenetrable ebony colour, iodine reflections and density tinting the glass. Its rich, sensual bouquet offers predominating notes of raisins, figs and dates together with aromas of honey, grape syrup and jam, as well as liquorice and toasty notes. Velvety and smooth on the palate, it has just enough acidity to balance its sweetness and a very long finish.

In the range of sweet wines, ‘cream’ is chestnut to mahogany in colour, dense in appearance with an oloroso-based bouquet that releases sweet notes, suggestive of citrus fruit and nuts, together with hints of muscatel grapes and raisins. It is velvety and rich to the palate, not overly sweet, and develops elegantly towards a long, very mild finish.

Sherry´s place in the world of wine starts with fine cuisine and the master tastings at the Alcázar are the perfect occasion to showcase this to consumers, many of whom were locals, and reveal Sherry Wines´ many qualities at the table.

something the Consejo Regulador has been doing for some time now in many major markets where Sherry is still considered an aperitif or dessert wine, more like a liquor or after-dinner drink rather than pertaining to the world of fine wine in its own right.

The programme of events in commemoration of the 80th anniversary will extend all the way until late November. On September 4, an exhibit highlighting the eight decades of history of the institution will be inaugurated at the Cloisters of St. Dominicus (Claustros de Santo Domingo) which will also serve as the venue for the  80th Anniversary Gala. These two events will coincide with the celebration of the Grape Harvest Festival (Fiestas de la Vendimia). Then, from 26-28 November, Jerez will host the Sherry Wine Scientific Seminar, at which an overview of Sherry Wines´ last 80 years will be analysed by experts from the University of Cádiz. This and all of the other initiatives undertaken by the Consejo Regulador in the coming months are aimed at furthering the development of the institution and the entities that comprise the Jerez Region wine industry.

The kickoff of the 80th anniversary celebrations comes just after the Sherry Wine Council´s return from the sixth edition of Sherryfest in New York. As in past editions, a wealth of restaurants, bars and wine shops took part in the festival held in the economic and cultural capital of the world. A comprehensive, three-day programme offered all those in the Big Apple many opportunities for Sherry Wines to be discovered and enjoyed through seminars, tasting sessions and culinary experiences while showcasing the features of these unique wines and their huge potential in food and wine matching.

Sherryfest represents the consolidation of an initiative of enormous international impact that started in New York in 2012 thanks to the efforts of American wine critic, Peter Liem, who, with the support of Sherry winemakers and bodegas, the Consejo Regulador and Fedejerez, aims to divulge the uniqueness, cultural values and gastronomic versatility of Sherry Wines. This year´s Grand Tasting surpassed all previous attendance records, with over 500 registered attendees, making this year´s Sherryfest the most successful to date. “This is proof, beyond any reason of a doubt, that wine lovers in North America have an interest and a growing taste for Sherry Wines” was the Council´s satisfied conclusion.