As happens with any other wine, natural factors like soil, climate or grape variety used are decisive in the quality of Sherry, but ageing is also a fundamental factor. The ageing of Sherry is the definitive phase in its production, and it is during this phase when the various styles of wine acquire their different characteristics. Whether it is by the unique process of biological ageing for the production of Finos, Manzanillas, and Amontillados, or by the oxidative ageing process which produces Olorosos, Palos Cortados, and the sweet wines, they all repose patiently in casks for many years.

In this process, the inner surface of the staves which is in permanent contact with the liquid becomes impregnated with the personality of each Sherry, components of which penetrate the interior of the oak intermingling with the natural elements of the wood and radically transforming the original colour and aromas of the cask. It is precisely these colouring and aromatising substances arising from the combination of oak and Sherry which make Sherry Casks unique; the noblest possible container for the subsequent ageing of the finest quality spirits like Brandy de Jerez or Scotch Whisky. 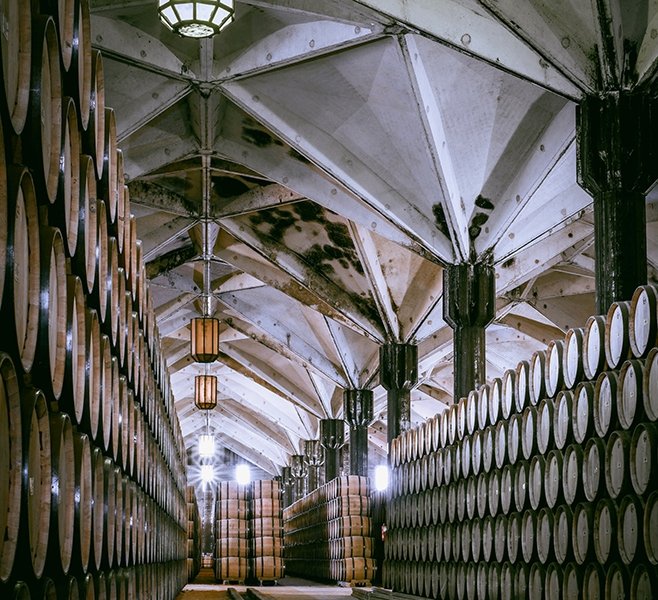 This almost magical process of seasoning takes place in very singular buildings: The bodegas of the Sherry area. Often called “Cathedral-Bodegas” because of their enormous size, pillars and high rooves, they are without doubt Sherry’s greatest contribution to the architecture of wine.

In a Sherry bodega everything has been carefully thought out to create the optimum environment for the ageing of the wine: the high rooves allow for a large volume of air which provides a large thermic inertia with respect to the conditions outside. Windows positioned high on the buildings’ walls allow the control of air circulation, control of humidity and the supply of oxygen, so necessary for the health of the veil of flor.

Indeed, the bodegas are constructed in strategic locations to allow the ingress of the gentle air currents from the west, from the Atlantic Ocean in fact. These usually blow in the form of nocturnal breezes, so the windows of the bodegas are usually opened at night to allow this humid air to enter. During the day however, they are kept closed to shelter the interior from the dry, hot Levante wind from the east which tends to predominate in the area in summer.

The rectangular floor plan of the bodegas is usually laid out on a northwest-southeast axis which as well as allowing unimpeded access of humidity to the interior of the bodega, minimises the impact of the sun during the hottest times of the day. 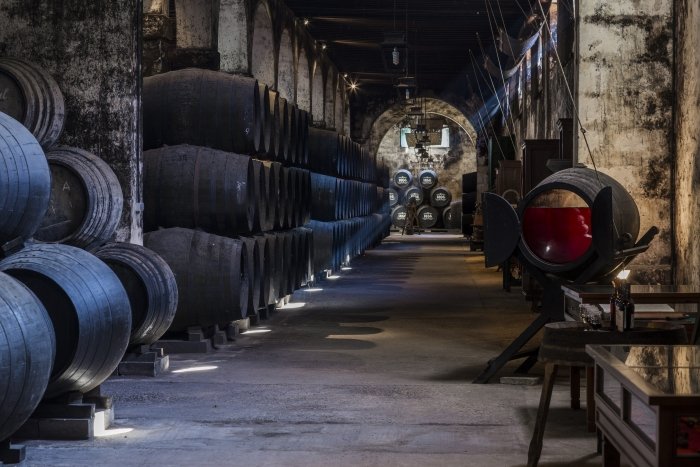 Also the building techniques used for the façade and roof of the bodega act as filters which either allow exterior climatic conditions inside for the best possible ageing of the wine, or do not. Interior temperature fluctuations are avoided thanks to the thermic inertia of the walls and their permeability to humidity which allows constant hygro-thermal stability, day and night.

The Sherry bodegas are unusually tall buildings which can reach up to 15 metres in height at their central arches. The interior space thus accommodates a large amount of air in which the heat tends to rise and accumulate in the upper part of the building. By opening the east and west facing windows high on the walls, a dynamic vertical and horizontal current is created which expels the accumulated warm air to the outside.

Externally, in summer the south façade is protected by screens of vegetation like trees or pergolas which control the sun in surrounding streets absorbing the sun’s radiation and forming breathable shading which allows the gentle breezes to filter through into the bodegas and maintain a suitable level of humidity inside. In winter when the leaves fall from this vegetal shading the walls are exposed, with their large whitewashed façades which allow them to absorb any sunshine, store the heat and radiate it overnight into the bodega.

The side walls of the bodega are never less than 60 cm thick to support the height of the external walls and at the same time produce considerable thermal insulation. The walls are made from materials which have a good capacity to absorb atmospheric moisture which helps maintain a high level of humidity inside.

The bodega floors are generally covered with “albero”, the same sandy grit used in bullrings, which is sprayed with water depending on the season, helping to regulate temperature and humidity. Albero is a very porous material which increases and maintains the cooling as once it is saturated it exudes the water into the environment only gradually.

In a nutshell, a bodega incorporates a whole range of construction techniques to provide the wine with the optimum conditions for ageing and developing into Sherry. 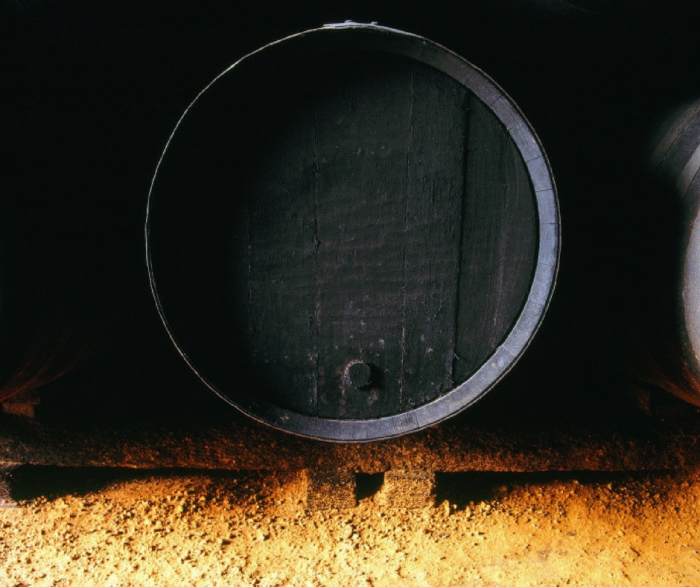