Amallar. Levelling off the staves on the interior of the butt once formed.

Apareado. (aparear). Giving the stave a suitable thickness reducing it from the ends to the middle.

Arco. General term for a hoop closed by two rivets which holds the butt tightly closed.  There are ten, five at each end of the butt with the following names from larger to smaller diameter: arco de bojo (bilge hoop), arco de en medio (quarter hoop), colete, talugo de amasar (there is no translation for these) and talugo de coronar (head or chime hoop). 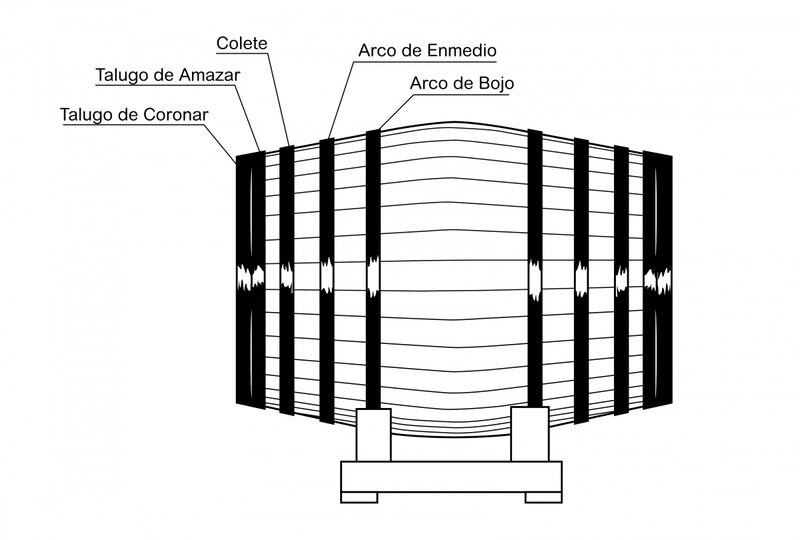 Aro. Another general term for the metal barrel hoops.

Arrumar. Classifying and grouping the rough-cut staves according to their thickness and suitability for staves or head pieces.

Arruñado. General term for the preparatory work for fitting the heads.

Aspillar. Measuring the volume of wine contained in a butt using a graduated wooden stick called an aspilla

Batidero. Place in the cooperage where butts are fired and hoops hammered down.

Batir. The act of hammering down the hoops to shape the butt.

Boca. Each of the circular openings in the butt for putting wine in or taking it out. There can be three: “boca de bojo” (bung hole), “falsete” (hole in the lower face of the head) and “registro” (hole on top of butt between the colete and talugo de amasar hoops).

Bocoy. A barrel bigger than a butt and of variable shape usually holding 40-42 arrobas or around 700 litres.

Bojo. Perimeter of the exterior of the butt at its widest part, the bilge.

Bota. A wooden container in which Sherry is aged. It has various capacities and names according to the use it is put to.

Bota Gorda. The standard barrel used in the bodegas for the ageing of Sherry with a capacity of 36 arrobas or 600 litres

Bota de Exportación (or bota de embarque) a butt of 30 arrobas or 500 litres.

Casco. Name usually applied to a barrel which is either empty or in construction. In the latter case it only applies to the part formed by the staves, excluding the heads.

Casquero. Cooper involved in the construction of cascos or whole butts.

Chanflete. Radial bevelling of the edges of the staves so they fit snugly together.

Chantel. (cant) The name of the two segment shaped outer sections of the head which sit next to the jarel.

Chivir. Planing the edges of the staves and the pieces which form the head for perfect fit.

Clavera. Name given to the consecutive series of hoop sections on the butt finished off by the lines of rivets.

Corcha A solid circular piece of cork used to seal the falsete during ageing.

Cordón Name for the edge of the staves which forms the end circumference of the head.

Descantonar Planing to shape of the staves.

Descapirotar Process of smoothing off the stave tips so they are all equal.

Dolador Name given to a cooper who prepares the staves and heads for the butts.

Duela A stave. Each one of the lengths of oak used to form the curved wall of the butt. The name is also applied to the lengths of wood the staves are cut from.

Empajado Putting a piece of rush straw (flag) which is opened out and clean between staves or between the croze and the edge of the head. In the first case this is done if, after the construction of the butt, the seal between some staves in not hermetic. The tool used is called a galafate de empajar. In the second case straw is inserted into the croze using a majador.

Entallar Cutting the staves to a suitable length.

Escalereta (horse) A wooden frame consisting of two parallel strips1.5 metres long fixed together at the ends by two crossbars of some 65 cm and in the middle two more crossbars quite close together fixed on opposite sides. This forms a holder for the stave while the cooper splits the rough stave.

Escaleretero A cooper who splits, selects and shapes the staves.

Escofina A semi-circular tool used to remove splinters on the inside of the butt caused by drilling the bungholes.

Esplayado Name given to the bevelling or chamfering of the inside tips of the staves.

Estreve A little cylindrical cage about 35x20 cm formed by a series of vertical metal strips with a hoop at either end. It holds oak offcuts and shavings for the firing process.

Falsete A bunghole located in the lower centre of the barrel head, in the mediano.

Fleteado Process of making the esplayado completely smooth at both ends of the butt.

Fondo A barrel head or circular wooden lid which seals the butt. They have two names depending which end they seal: “fondo de mole” seals the first end to be made and the “fondo de batir” seals the second. Each head consists of seven flat pieces of oak which are held together by their slightly convex longitudinal edges called “juntos”. These pieces have names which can be found here and in the diagram below. The falsete is located in the mediano of the fondo de mole head. 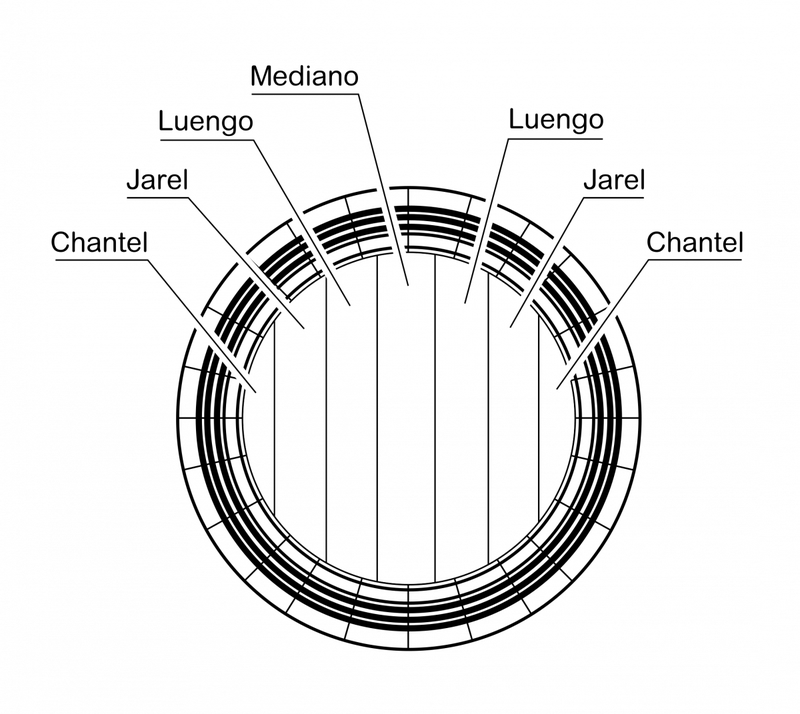 Galafate de empajar A tool consisting of a metal bar with a handle at one end and a small, thin metal sheet at the other. It is used during empajado where the sheet is hammered between the butt staves to separate them slightly for the addition of the straw.

Galga A cooper’s plane with a handle at either side. It is used to plane the staves longitudinally, and in artisan cooperages, to polish them.

Garra A hooked nail used to ensure the hoops remain in place on export butts. The part nailed into the stave is called “pinche” and the angled part is called “cabezita”.

Gavilla A small block of wood with a groove in the middle used to hold the staves in position as they are assembled into the first hoop when raising a butt.

Haba The area of a butt between the inner edge of the esplayado and the jable.

Hendido The job of transforming the rough staves of an approximately triangular section into flat staves by planing along the grain.

Jabladera A croze cutting tool resembling a carpenter’s marking gauge consisting of a flat board with a wooden bar through it, adjustable at the top and with a handle on the bottom. In the middle is a set of two blades and a chisel which cut the jable.

Jable The croze, the groove cut round the upper and lower inner surfaces of the butt to locate the heads.

Jarel The name given to the two parts of the butt head locate just inboard of the chantel.

Luengo The name of the two parts of the butt head located between the jarel and the mediano.

Macear To hit with a mallet.

Majador A little olive wood or metal bar with a spatula at the end, used to push straw into the jable.

Martillo de tonelero Cooper’s hammer with a tapered solid edge and an iron head weighing about two kilos. They use it to hammer down hoops (batir) and bedding them in (“encamado”) and also for cutting, drilling and riveting the metal bands to form hoops.

Maza A cylindrical mallet with a head made from holm oak on the same axis as the handle. The head has a groove round it near the top. It is used for hitting the splitting knife in the escalereta.

Media (bota) Half butt with a capacity of 15 arrobas or 250 litres approximately.

Mediano The central and longest piece of the butt head.

Mole A hoop whose diameter is equal to the exterior circumference of the tiesta (top or bottom of the butt) and which, with the “aro corregidor” is used in the raising of the butt.

Paradura Curved area about 8 cm deep on the inside of the butt formed by the tips of the staves and in the central part of which the jable (croze) is cut. 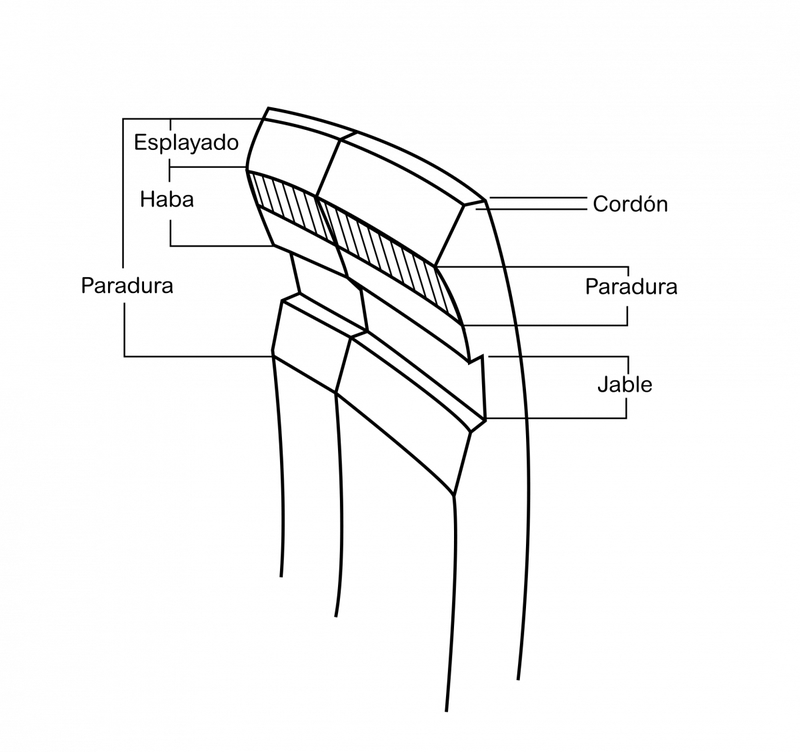 Parea The circumference of the butt at its widest point where the bunghole is located.

Plana A kind of large cooper’s plane. It is a long rectangular box fixed to the floor leaning to one side on three legs with two cross bars near one end and a for the butt heads for a perfect fit.

Raspado Process of shaving the outside surface of the staves to make them slightly convex.

Rebotar Smoothing off the ends of the tiesta so they are equal in length after the descapitotado.

Registro A small bung hole in the top stave between the second (talugo de amazar)and third hoops (colete)from the end of the butt. It helps extraction and enhances ageing under flor.

Retundir Planing the exterior edges of the staves to give a smooth finish.

Taladro A form of drill consisting of a steel half cone with cutting edges and a wooden handle used to widen the hole made by the drill (“barrena”).

Talugo de amazar The hoop second from each end of the butt almost touching the talugo de coronar.

Talugo de coronar The endmost hoop on each end of a butt.

Talla The length of a butt along its axis.

Tiesta The extreme ends of the staves between the cordón and the jable (croze).

Trabajadero Term for a cooperage workshop where butts are made or repaired.

Vaciado Process of giving the internal faces of the staves a concave shape.

Vasija (vessel) In the language of bodegas and in general terms, any kind of butt, tonel (vat), barrel etc destined to be used for storing wine.

Vitola The diameter of the cordon or the ends of a butt.

Volado Slight exterior curvature of the sections of the butt head.