Andalusians get all excited as feria approaches. It's the warmth in the air, the scent of flowers in bloom, the lighter and longer days of Spring and the idea of having a whole summer just around the corner what also gets people in this shared and magical festive mood.

You know someone has been hit by the Spring fair spirit when they say they can smell it. They will then repeat "¡Ya huele a feria!" (it smells like the fair already). This comment is often accompanied by some clapping and/or by a sudden and short Southern Spanish dance move. Both this popular phrase and the corresponding feria mood are extremely contagious so in very little time after the arrival of Spring, millions of Andalusians await with great impatience their local fair.

It's also then when dozens of colourful marquee tents, or casetas, start to be assembled on the local fair grounds, which are totally empty the rest of the year. Casetas feature an improvised bar, kitchen, stage and dance floor and they are the main scenarios of the great deal of socializing, singing, dancing, eating and drinking taking place during these festivals, which last between 3 and 7 days.

Dry sherries such as fino and manzanilla are the king and queen of drinks at the ferias in and around the Sherry Triangle. Actually it's not a coincidence that the feria in El Puerto de Santa María is officially known as Feria del Vino Fino and the one in Sanlúcar de Barrameda as Feria de la Manzanilla. In other ferias such as the ones in Jerez (Feria del Caballo) and Seville (Feria de Abril), fino and mazanilla are also and respectively the most common drink, usually as part of a refreshing cocktail called rebujito, where any of the two is mixed with ice cubes and lime soda in a jug. These jugs make it easy to share your rebujito by filling the glasses of friends and family as you bump into them in different casetas. Food is also to be shared during the feria and comes in raciones that are passed around so that everybody in your party gets their bite.

Music plays a key role at the feria too.  The most common tunes to be heard are Sevillanas and they are widely danced to by men and women of all ages, normally in couples. Sevillanas are short, fast and cheerful songs with four different phases, each of which is to be danced to by following different steps involving an increasing level of spinning, arm lifting, foot tapping and position swapping. Women are the absolute stars at the dance floor as it is during the feria when they wear the long and colourful ruffle dresses called trajes de gitana or trajes de flamenca. These beautiful dresses are specially designed to highlight the woman figure and they fill the feria with colour and movement, giving this festival a very special, elegant, sensual and charming touch. 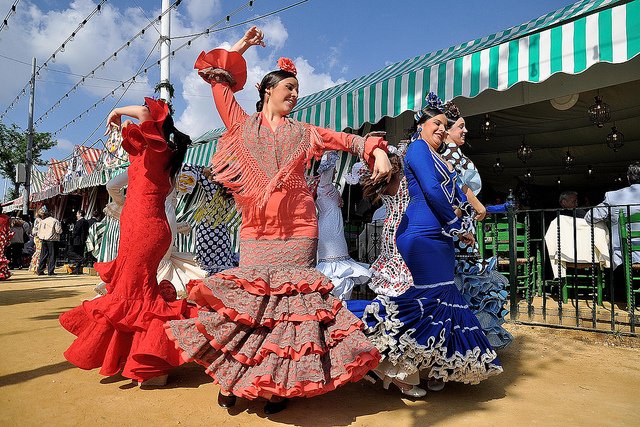 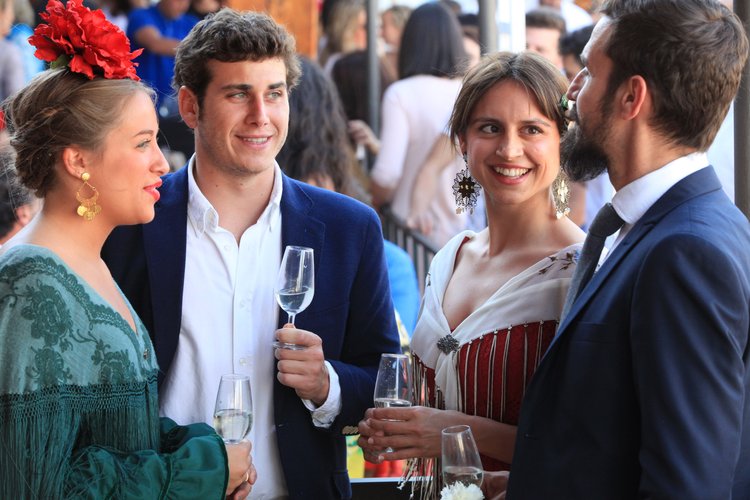 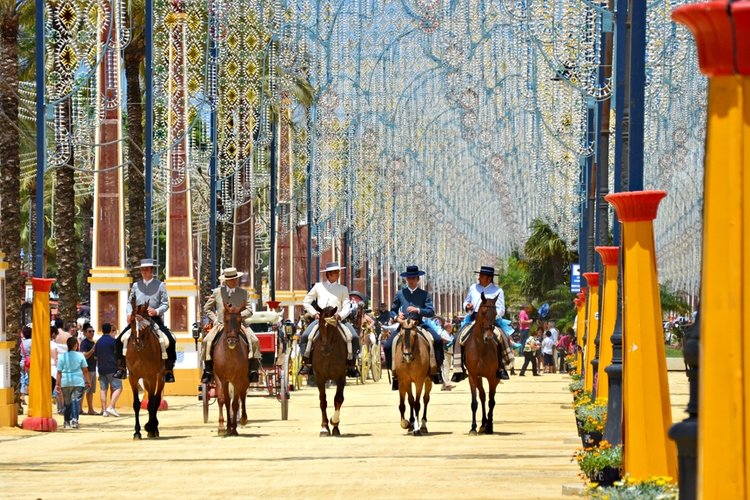 If you happen to be in or around the Sherry Triangle this Spring, don't miss the opportunity to experience the explosion of joy and colour and the beautiful sherry-geared dance moves of any of the ferias!

This year's calendar of ferias in Seville and in the Sherry Triangle is as follows:

Feria de Abril in Seville: from April 26th to May 1st

Feria del Caballo in Jerez: from May 9th until May 16th

Feri del Vino Fino in El Puerto de Santa María: from May 20th until May 25th

Feria de la Manzanilla in Sanlúcar de Barrameda: from May 19th until May 24

This article was originally published in 2017 and updated on December 12th, 2019.