Sherry Week 2020 -The World’s Biggest Sherry Party – in your home!

Like many international events affected by the COVID-19 pandemic, the seventh Sherry Week has adapted its programme to current circumstances. A wide variety of exciting events will be available through the web and/or on Social Media

For Sherry Week, with its strong international focus, ensuring that events can reach the widest possible audience of Sherry-lovers has always been a priority. The event harnessed the power of Social Media from the early days, offering the first-ever Twitter Tasting in 2015, as well as online tastings transmitted direct from wineries in Jerez to as far afield as Australia, Japan and Mexico, and achieving phenomenal social engagement (167 million potential impacts across Twitter, Instagram, Facebook in ISW since 2014).

This innovative and creative approach has built a passionate, committed and dynamic international Sherry community across five continents as well as winning for the second time, the Best Digital and Social Media Campaign at the 2020 Drinks International Awards.

This year the D.O. of Jerez-Xeres-Sherry and Manzanilla will bring the party to the Sherry community at home, teaming up with professionals who love to talk, drink, cook and shake with these uniquely versatile wines, from world-renowned chefs and sommeliers to passionate Sherry educators. The international Sherry community can look forward to a series of virtual events from all over the world including masterclasses, interviews, cooking classes, podcasts and online tastings.

It will be hosted by producers, Sherry Educators, sommeliers and mixologists from all over the world, with a focus on a different style of Sherry Wine each day:

Now a regular event, the Twitter Tasting was pioneered by the blog Sherry Notes together with Sherry Week. This year’s tasting is themed “Old stuff v. new stuff” and will feature 10 wine critics and bloggers sampling 3 rare bottle-aged sherries from as far back as the 1960s, compared with the same bottle of today. The tasting will be live streamed with viewers able to take an active role by posting comments and questions.

This event will take place in China, Australia, the UK, Spain and the USA, over the space of 24 hours. One restaurant in each country will offer a Sherry-pairing meal, for Sherry lovers to enjoy in the comfort of their own home.  A Sherry Wine will be chosen to match each dish, and a sommelier or winemaker from Jerez will explain why this wine pairs so well with it.

JOSEP ROCA AND CESAR SALDANA WEBINAR FOR SOMMELIERS (IN SPANISH)

The co-owner and sommelier of the Celler de Can Roca, twice voted the World’s Best Restaurant, along with César Saldaña, president of the Consejo Regulador, will present a live Guide to Sherry webinar for sommeliers. This will be offered in Spanish on Zoom. Pre-registration is required.

All week the documentary film The Mystery of Palo Cortado will be available to watch, streamed into the comfort of your own home, free of charge.

Sherry aficionados the world over are more committed than ever to learning about their favourite fortified wines, as well as introducing friends to the delights of these most versatile wines. 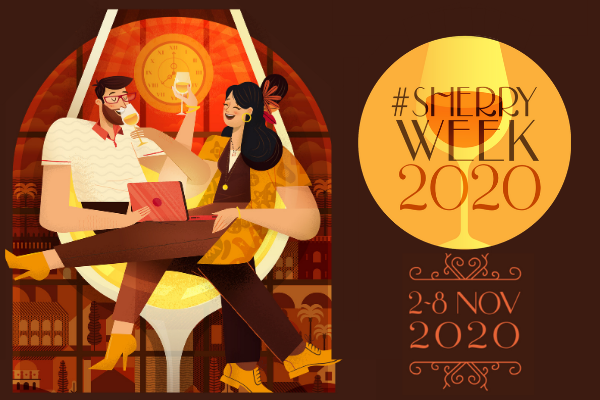